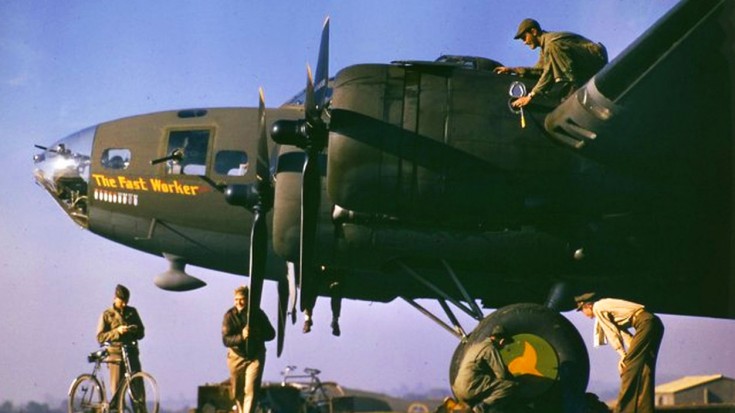 Here Are Some Facts Your Friends Probably Won’t Know

1.Temperatures Onboard Could Get Down To -50 Fahrenheit 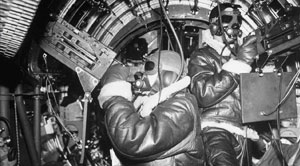 The cabins at that time were not pressurized or heated, meaning that B-17 crews were exposed to the various elements at over 30,000 ft. Yes, they wore special electrically heated suits, heavy gloves and oxygen masks, but that still did not make it a comfortable ride by any means. Think about it, some missions would typically run from six to eight hours so imagine how much discomfort the crews had to endure. And they had to deal with more than just the very cold flight. Staying warm in bulky suits wasn’t exactly the best option but with the raging war and everything else going on, it wasn’t the main priority. Besides, when you look back now, they did what they had to do even in the direst circumstances. They managed to work around certain disadvantages and still delivered. It wasn’t easy AT ALL for the young men who flew these planes.

2.B-17s Were Used As Target Practice During the 50s 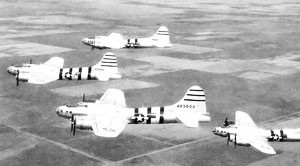 As there was a major surplus of B-17s after the war ended, 107 of them were converted into drone aircraft and designated QB-17 in 1946. They were then used as target practice for surface-to-air and air-to-air missiles being developed at the time. These drones were initially used for Operation Crossroads’ (nuclear weapons tests) atmospheric sampling. The purpose of this was so the aircraft could fly close to the mushroom clouds without putting any crew or pilot in danger. The B-17 drones could even go through them! This eventually led to more conversions with some being used for atomic testing. The last mission which used a QB-17G as a target for a McDonnell F-101 Voodoo firing an AIM-4 Falcon air-to-air missile happened on August 6, 1959. A few days later, a retirement ceremony was held and it’s currently retired in the aviation museum Planes of Fame which is located in Chino, California. 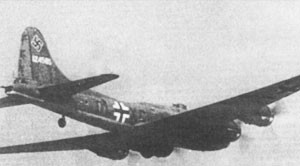 Because there was an insufficient number of German aircraft with long range, they utilized the captured B-17s and B-24s (which either crash landed or were forced down) to complete long-range reconnaissance missions. They aided in dropping supplies to those German forces which were stationed and operated in the Soviet Union. They were also used to transport important staff and other personnel. On June 27, 1944, a B-17 bearing KG 200 markings was interned by the Spanish government when it landed in the Manises airport. There were about 40 downed or captured B-17 Flying Fortresses over Germany, with about 12 of them being put back in the air with Nazi markings. They used them for training as well as transport and gave them the fictional designation of Dornier Do 200 and Dornier Do 288 (an aircraft somehow managed to return to Athens for repair after being badly damaged during a raid).

4.Their Norden Bombsights Were Kept Secret 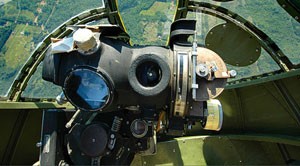 The Norden bombsight was the most precise bomb guiding instrument at the time and was kept out of the public’s eye until the end of the war. Although Nazi Germany had similar technology, they had a spy named Herman W. Lang working at the Carl L. Norden Company who stole the entire plans before the war even started. Also known as the Norden M series, it was used by the United States Air Force and the United States Navy. This system, which was ahead of its time back then, could give a direct and accurate measurement of the aircraft’s ground speed and direction. It can react even to slight wind changes. The bombsight allowed for accuracy in direct attacks to point targets and day bombing in high altitudes. After World War II, it saw some use in the Korean War and until radar-based systems were eventually used. It’s still one of the most famous bombsights in history.

5. Boeing Built Fake Towns On Top Of Their Factories 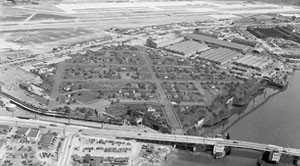 In 1936, the manufacturing plant of Boeing in King County, Washington (known as The Boeing Plant 2 or also called Air Force Plant 17) was finished with a total floor area of 60,000 square feet. On May 1940, another 600,000 square feet was added and on December 1941, the entire floor area has grown into 1,776,000 square feet (to accommodate the production of B-17s). After the attack on Pearl Harbor, Boeing was afraid that the plant might come under fire. To hide it from any aerial attack, the US Army Corps of Engineers installed fake streets and homes made of plywood and fabric. Typically, military targets would be hidden under netting or other counter measures, but Boeing built actual houses and roads to mislead any possible bombing raid squadrons. Everything was done to camouflage the roof of the factory building and to make it seem like there’s no facility in the area. Talk about hiding in plain sight!

6.The Crew’s Flak Vests Weighed Up To 30 Pounds 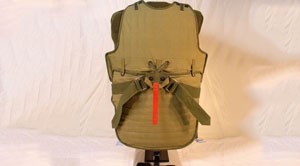 As we mentioned earlier, convenience and comfort weren’t exactly the top priorities when it came to the circumstances that the B-17 crews had to endure. From the cabin situation to the suits, it’s hard to imagine what they had to go through for every single mission. You see, to protect the crew from Flak and possible debris (either from enemy aircraft or ground fire) flying around from a damaged plane, they were given specially designed flak vests. Bomber crew would comment that the “flak was so thick you could walk on it.” They were typically put on while nearing the targets, as they weighed almost 30 pounds and would be impossible to wear for the entire duration of the mission. Why was it so heavy? Well, some of these vests had steel plates sown into them. But although they were bulky and inconvenient to wear, they were effective at stopping flak.

7.The B-17G Variants Were Given An Additional Turret 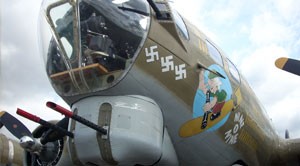 Since the Flying Fortresses were bombers, they were not very maneuverable and the pilots were trained to fly straight and in tight formations as a basic defensive maneuver. They had little defenses when interceptors came at them head on, so the latest variant had a chin turret added with 2 .50 caliber M2 Brownings that were remotely operated by the bombardier or toggler. The chin turret feature was lifted from the design of the unsuccessful Boeing YB-40 Flying Fortress escort version. This innovation undoubtedly improved the forward firepower and defenses of the aircraft. It also uses a reflective gun sight and control yoke (which can be easily swung out of the way if the bombardier decides to use the Norden bombsight located directly in front of him). However, there were also some problems encountered with the chin turret including the likelihood of cracking the plexiglass nose when it’s being fired at maximum elevation.

8.B-17 All American Survived A Devastating Mid Air Collision 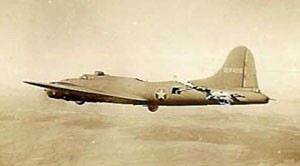 These iconic bombers were known for their ability to take a beating and bringing their crews back home which was set in stone when on February 1, 1943 a German fighter plane hit the All American over the Tunis dock area during a bombing mission. The enemy aircraft crashed into the rear of the fuselage of the B-17. Her tail was almost completely severed, just swaying in the wind as she flew. The fighter plane broke apart leaving some heavy flak attached to the B-17. The crew led by the pilot Lt. Kendrick R. Bragg of the 414th Bomb Squadron proceeded with the mission, did their bomb run and miraculously returned back to base. Even while on their way home, enemy fighters still pursued them. With these attacks all the while braving serious damage, the All American has earned a legendary reputation by landing safely even with a missing tail wheel. 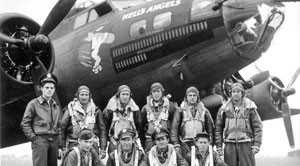 Before 1944, the crews’ tour of duty was set at 25 missions. Flying Fortresses were sent on some of the most dangerous missions, as they were designed to bomb targets that were deep in enemy territory. Encountering heavy flak and intercepting fighters, it is estimated that 25% of all B-17 crews sent out never made it back – an average of one out of four can complete his duty. However, in early 1944, the tour of duty was increased to 30 missions. Lt. Joseph Hallock, a bombardier on B-17 ‘Ginger’, began his combat career on December 31, 1943. He recalls his last two missions: “The twenty-ninth mission was to Thionville, in France, and all I thought about on that mission was ‘One more, one more, one more.’ My last mission was to Saarbriicken. One of the waist gunners was new, a young kid like the kid I’d been six months before. He wasn’t a bit scared – just cocky and excited. Over Saarbriicken he was wounded in the foot by a shell, and I had to give him first aid. He acted more surprised than hurt. He had a look on his face like a child who’s been cheated by grownups. That was only the beginning for him, but it was the end for me.” 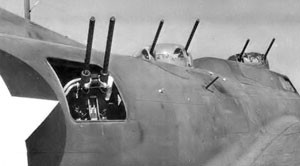 Before the North American P-51 Mustangs were developed and eventually used to escort B-17s on their dangerous bomb runs, a few B-17s were converted to ‘gun ships.’ They were fitted with 18 .50 caliber M2 Browning machine guns and had room for up to 30 while carrying 10,700 rounds of ammunition. They were briefly used to protect other B-17s on bombing missions and provide a heavily gunned escort to accompany the bombers on their way to the targets and back. Its first flight was on September 1942 and retired a year later, on October 1943. Unlike the standard B-17, the YB-40 has a second manned dorsal turret which was installed in the former radio compartment. Aside from converting the bomb bay into an ammunition magazine, they also installed additional armor plating for added protection of the crews. The YB-40’s gross weight is also way heavier than a fully armed B-17.