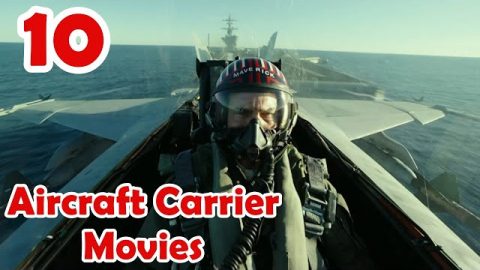 Here are the ten Hollywood movies that used real-life aircraft carriers despite the cost and complexity:

Set in the Korean war, the movie follows the story of Grumman F9F pilots. The movie was even shot aboard two real-life WWII-era carriers.

The film used several mock-ups, particularly T6 Texans for Mitsubishi Zeros. It also had access to the carrier USS Yorktown, a museum ship in South Carolina.

The film centers on the most significant naval battles in history. The movie was also filmed aboard the USS Lexington, which was then in service at that time and not a museum ship.

The Final Countdown is definitely has one of the best carrier scenes on this list. The concept is the USS Nimitz, sent back through time right before the Pearl Harbor attack.

Top Gun is probably everyone’s favorite 80’s flight movie. It took place in the USS Enterprise and centered around the F-14a Tomcat.

The movie follows Grumman A-6 Intruder pilots during the Vietnam War. Filming took place aboard the USS Independence, which actually operated off Vietnam starting in 1965.

In the movie, the production team had access to the USS Lexington. Although now a museum ship during filming, it was a genuine WWII carrier that fought at the battle of the Philippine sea and Leyte Gulf.

The story follows a fictitious navy seals operation in Nigeria that operates off the USS Harry S. Truman.

Filmed on the USS Abraham Lincoln and USS Theodore Roosevelt. Maverick also finally flew a Fa-18e Super Hornet and even a P-51 Mustang.