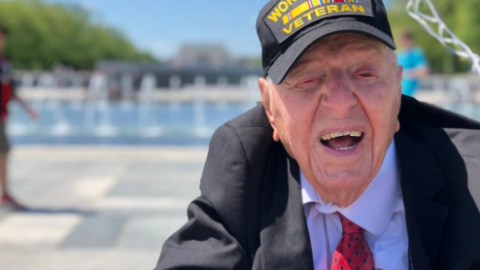 Corporal Sidney Walton’s mission to visit every American state was born out of painful and lasting regret.

As a young boy, he had already wished to meet some of the slowly-vanishing veterans of the American Civil War, but he eventually passed on this opportunity – a decision he regrets until this day.

Realizing that the veterans of the  Greatest Generation are slowly dwindling, he’d decided to set out for a tedious mission in the twilight of his life: Visit all 50 states in order to give our own generation the opportunity to meet one of the Great War’s men of valor, possibly for the last time. He fittingly calls this mission the “No Regrets Tour.”

I took our 1 yr old to meet a 100 yr old World War II veteran just steps away from where students protested a decorated General Friday- if not for the Greatest Generation & people like Sidney Walton, those students might have been speaking German. #DeepThoughts #FreedomIsNotFree pic.twitter.com/CocEkDDkrh

Walton joined the Army in March 1941 – Nine months before the attacks on Pearl Harbor. He said that his motivation for enlisting was his desire to fight Hitler. As fate would have it, however, he would go on to serve as a medic in the Burma-India-China theater.

Despite the massive media coverage and the courtesy visits he had paid to the state governors, Walton insists that he is not seeking the publicity for his own vainglory: On the contrary, he exhorts today’s generation to get out their way to meet, support, and retell the sacrifices and heroism of  the WWII Veterans still among us today.

Moreover, he does not want patriotic Americans to feel the same way he did when he had foregone the chance to personally honor the veterans of the Civil War.

‘No regrets’ for 100-year-old WWII veteran Sidney Walton. He started his nationwide tour one year ago and doesn’t plan on stopping. pic.twitter.com/qDG8I8AATW

The Rhode Island legislature released a resolution in recognition of Corporal Walton and the noble men who fought and died honorably in the Second World War, which reads:

“As the Greatest Generation passes away, here is one last opportunity to thank Corporal Walton,  a member of that generation who served our nation so nobly through its period of greatest need.  Their contributions to our nation and to the preservation of civilization itself should never be forgotten.”