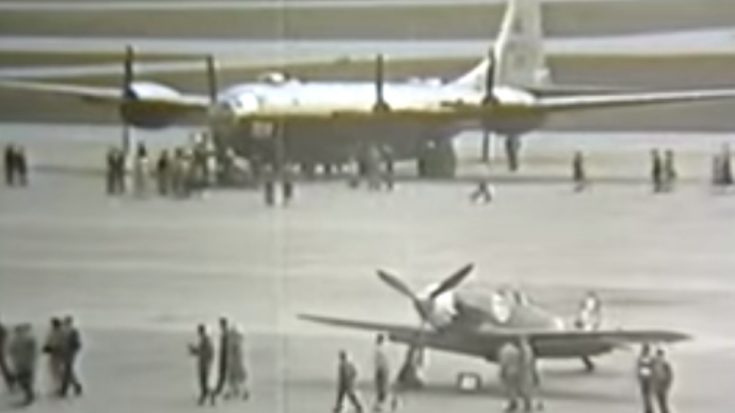 With the war over, it was time to clean up, record new knowledge and technologies, and then move on. Part of that process included Operation Lusty, the organized effort to collect, ship, and evaluate enemy planes. Heading the endeavor was US Army Air Forces General Henry “Hap” Arnold. He ordered one type of each enemy aircraft operated to be preserved.

The Making Of The Greatest Show

The shipments of captured aircraft to the US was split between the US Navy and Army Air Forces. The AAF actually ran out of room to store them at Wright Field, so all of the surplus went to Freeman Field near Seymour, Indiana. Freeman Field became the new Foreign Aircraft Evaluation Center.

Axis aircraft were evaluated, catalogued, and stored between June 1945 and December 1946.

But while these planes were being evaluated, they might as well have an air show, right? The footage of the September, 1945 air show at the Freeman Army Airfield is out-of-this-world spectacular. The planes taxied right up to the crowds and performed super low flybys. And if you’re amazed by all the aircraft there – Junkers Ju 290 A-4, B-25 Mitchells, Thunderbolts, Ju-88, Me-163, V-1 and V-2, a Fairchild C-82 Packet – many of the captured planes hadn’t even arrived yet!

One Of A Kind

Sadly, most of the planes were sent away to be disposed of after Freeman Field closed. The larger aircraft went to the Davis-Monthan Air Force Base and the fighters to O’Hare International Airport. A few survive today, including the Smithsonian’s Air and Space Museum Arado Ar 234, Donrier Do 335, and Heinkel He219.

This just makes this incredible footage all the more special. Check it out below!