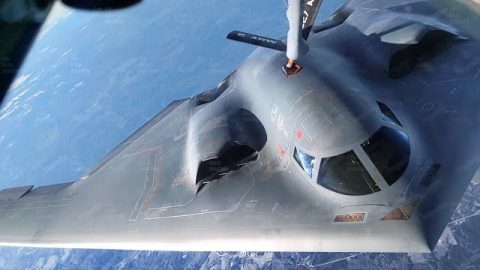 Built by Northrop Grumman, the B-2 Spirit is a fourth-generation stealth bomber that features a low-observable stealth technology that could penetrate dense anti-aircraft defenses.

It first flew back in July 1989 and would enter service in 1997. It had a gross takeoff weight of 376,00 lbs. and spans approximately 172 feet and 69 feet long. This aircraft can strike anywhere in the world with air refueling, and it’s nuclear capable as well.

As you can see in the video, this iconic plane looks impressive as it barrels down the runway for takeoff. It was then seen flying over the Missouri University football stadium as the crowd cheered below. In most cases, B-2s are asked to do flyovers on national events like a super bowl flyover. What an impressive sight!