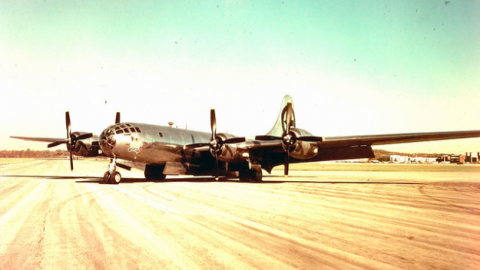 The highly advanced B-29 Superfortress was patterned from the successful B-17 bomber. Because of its combination of unprecedented technology and unique firepower, it quickly became the largest operational aircraft during World War II.

In 1944, the computer was in its infancy and found its most famous breakthrough within Bletchley Park, when Alan Turing’s team decoded the Nazi Enigma Machine. This breakthrough was just as enormous as his computer, which filled up an entire room by itself.

Fortunately, the Superfortress was such a massive aircraft that ample space was available for a new high-tech computing device.

The B-29 was the first aircraft with an unmanned heavy machine gun.

The B-29 still needed its gunners. However, they were no longer required to physically operate the heavy machine guns near the fuselage.

Instead, analog electrical equipment controlled an optically-aimed targeting system, which came to be known as the Central Fire Control Computer System.

With this system, the gunner aimed the sight directly and the turret would turn to follow the sight-position signal. When the target gets locked in, he would press the trigger and send electric impulses through a cable and into the turret, thus vastly improving the gunning operation’s speed and proficiency.

With the pressurized cabin, the crew needn’t be exposed to the cold thin air encountered at high altitudes.

The fully pressurized cabins provided much-needed relief to the crew.

Before the introduction of pressurized cabins, the high altitudes exposed aircraft pilots to reduced oxygen tension in the brain that caused loss of consciousness and blurry thinking – even death.

With pressurized cabin’s cool and humidified environment, the aircraft had suddenly become a comfortable environment which was very conducive for the high-altitude missions that defined the Superfortress.

In a skirmish over Kyushu island, one B-29 successfully fended off 79 Japanese fighter planes and shot down 7 of them.

It was quite a chase, which covered almost 300 miles. After damaging two more enemy aircraft, the Superfortress landed in Western China without any apparent signs of damage and bullet holes.

The Superfortress was armed with a rapid-fire 75-mm cannon, and it could carry twice the number of .50-caliber Browning M2 Machine Guns heavy machine guns.

To elaborate, the more powerful cannons fired a wide array of powerful ammunition that included tracers, incendiaries, and armor-piercers.

Meanwhile, the heavy machine guns had the muzzle boosters and spring buffers that greatly improved its rate of fire.

This operation truly elevated the B-29 into the lore of aerial warfare.