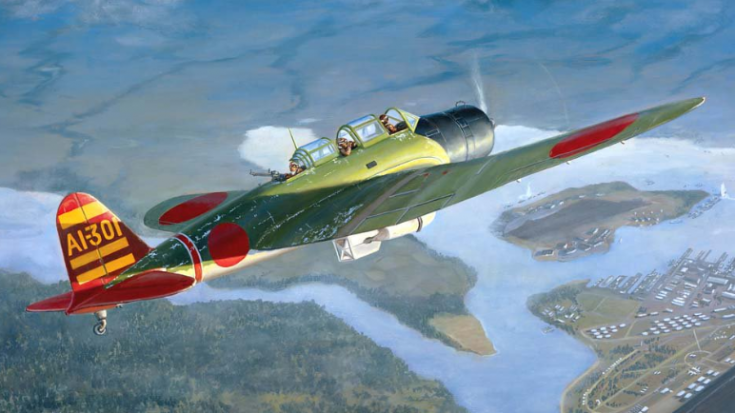 The Nakajima B5N Kate may have lurked behind the A6M Zero’s shadow, but its battle-tested pilots claimed a staggering 90% hit rate in the Attack on Pearl Harbor.

On that unfateful day, Nakajima B5N’s spearheaded two attack waves that blitzed in succession and effectively paralyzed the US Naval Base in Oahu. It was equipped with improvised weapons for this particular mission, including wooden fins fitted on its torpedoes and tail fins on its bombs.

1. At the time of the infamous attack, Kate was generally viewed as the best Torpedo Bomber in the world.

For example, the USAAF named the TBD Devastator as the most radical and effective modern torpedo bomber in the world: It was the first all-metal aircraft that served in the US Navy and the first one to have hydraulic folding wings.

But Japan had caught up with the fast-paced aircraft development of the war’s early years. By the time the attack occurred, the Devastator’s subpar speed, maneuverability, and armor rendered it obsolete.

Meanwhile, the B5N proved to be crucial throughout the whole war and formed a part of the Japanese Trifecta that besieged Pearl Harbor. The other two were the Mitsubishi A6M Zero and the Aichi D3A.

The Nakajima B5N torpedo bomber pilots are posing in front of one such aircraft on the deck of the Japanese carrier "Kaga", 6 December 1941. the day before the air attack on Pearl Harbor

2. After the Pearl Harbor Attacks, Kate achieved great success in the Pacific Theater the following year.

The Nakajima B5N had become the Imperial Navy’s standard tactical bomber. In 1942, it took the spotlight in Japan’s Pacific Campaign and dealt fatal blows to the Allied efforts, most notably in the battles of Midway and the Coral Sea.

In the said battles, Kate played a crucial role in sinking the American carriers Hornet, Lexington, and Yorktown.

The B5N was brilliant during the early stages of the war, but it also possessed the attributes that also doomed the Zero:  The absence of self-sealing fuel tanks, and the lack of an effective defensive armament and armor protection.

The Japanese command emphasized agility and speed, which necessarily meant shunning the added weight of armor protection.  Its loaded weight was estimated to be a meager 8,380 lbs; meanwhile, its Midway nemesis, the TBF Avenger,  was a heavily-armored aerial tank which recorded a maximum of 15,905 lbs.

When the Great Marianas Turkey Shoot came,  Kate and Zeke were no match for the Hellcat, the Avenger, the Devastator, and the Corsair. Like the Zero, It ended its career as a kamikaze aircraft – the Japanese air service member’s ultimate expression of honor and sacrifice at the time of the war.