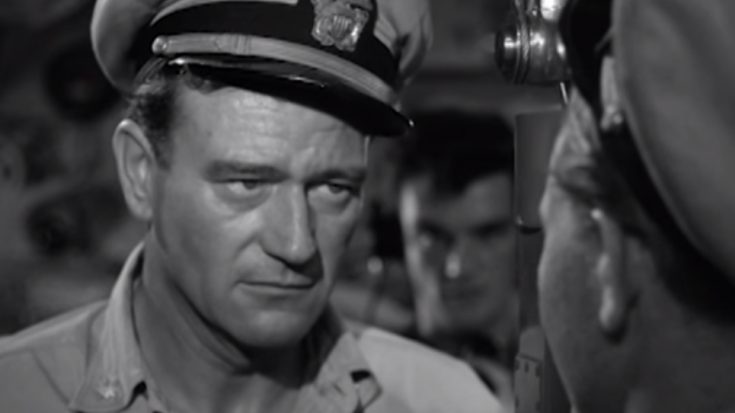 John Wayne is one of the most well-known Hollywood names of all time. The actor, director, and producer starred in a whopping 142 movies and though most were Westerns, a good chunk of those were also WWII films. But despite his onscreen heroics, Marion Morrison (his real name) never made it into military service during WWII. Here are 5 reasons why “Duke” never became in person what he was on film.

In June 1934-year-old old John Wayne registered with Selective Service and was classified as 3-A. This mean that because he had 4 children and a wife to provide for, he was exempt from serving. With plenty of young, single men to serve when the U.S. first entered the war, this was fairly standard. However, this deferment was meant to be temporary.

By 1943, John Wayne was once again eligible to serve, but it still didn’t happen. A 2-A occupational deferment was submitted on his behalf by Republic Pictures. John Wayne’s breakthrough role in John Ford’s 1939 “Stagecoach” made John Wayne the studio’s only A-list actor under contract. Understandably, they didn’t want to lose him. Also, he was beginning to feel the results of his stardom, continually stating his intentions to join after “1 or 2 more.”

John Ford and John Wayne had a complicated relationship that spanned over 50 years. It was Ford who first gave John Wayne, then still Marion Morrison, walk-ons in his films. Ford would go on to be commissioned as a commander in the United States Nay Reserve and consistently degraded John Wayne for not enlisting, telling him to “get into it” and that he was growing rich while others were dying.

However, a letter penned by John Wayne addressed to John Ford suggests that Wayne did take this to heart. It reads:

“Have you any suggestions on how I should get in? Can you get me assigned to your outfit, and if you could, would you want me? How about the Marines? You have Army and Navy men under you. Have you any Marines or how about a Seabee or what would you suggest or would you? No I’m not drunk. I just hate to ask for favors, but for Christ sake you can suggest can’t you? No kidding, coach who’ll I see..”

But then there was Marlene Dietrich, a German-American actress who, to her credit, did her patriotic part by being one of the first (and most successful) celebrities to sell war bonds.

She proved incredibly distracting for John Wayne, who began a 3 year affair with her on the set of “Seven Sinners.” Marc Eliot, author of “American Titan: Searching for John Wayne,” suggests that Wayne never wrote Ford at all and that he dodged serving in WWII because he feared he would lose the wily actress.

“When she came into Wayne’s life, she juicily sucked every last drop of resistance, loyalty, morality, and guilt out of him, and gave him a sexual and moral cleansing as efficiently done as if she were draining an infected sore.” – Marc Eliot

However, it may have all come down to paperwork misplacement. The grandson of William Ford recalled that his grandfather told him that OSS Commander Commander William Donovan did indeed approve John Wayne’s application. But the paper stopped at the home of Wayne’s estranged former wife. She could have simply neglected it or intentionally withheld it, still counting on Wayne’s star power to support herself and their 4 children.

The bottom-line is that the super star ended up missing his chance to serve during WWII. He made sure, however, that he was politically active in the post-year wars. Wayne created and became President of the Motion Picture Alliance for the Preservation of American Ideals against communism in Hollywood. This act was considered to be, at least in part, out of guilt for what he had missed. Still, his films inspired so many and he, to this day, is considered to be just about as ideally American as American can be.