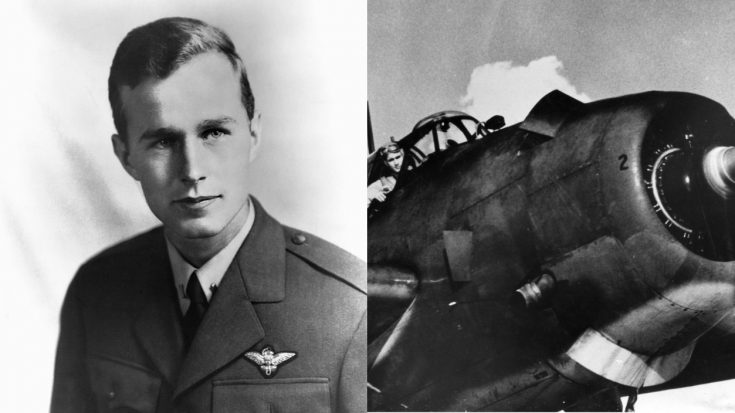 Former President George Herbert Walker Bush passed away on November 30th, 2018 at the ripe age of 94.  He lived a remarkable life of many achievements; as a Navy pilot, businessman, ambassador, and most notably, as the 41st president of the United States. Here are 5 facts from the life of this larger-than life figure.

5. His marriage to Barbara was the longest presidential marriage in American history

George H.W. Bush and Barbara Pierce had a classic love story. They met at a dance when they were just teenagers and, after a long distance courtship, married on January 6th, 1945 while Bush was still serving in the Navy a pilot. Together they had six children; George W., Robin, Jeb, Neil, Marvin, and Dorothy. When Barbara passed away on April 17th, 2018, the couple had been married for 73 years.

4. He was the youngest fighter pilot in the Navy

The attack on Pear Harbor changed everything for Bush. He enlisted in the U.S. Navy the moment he could upon turning 18. On June 9, 1943, just shy of turning 19,  he was commissioned as an ensign in the Naval Reserve at Naval Air Station Corpus Christi. This made him one of the youngest pilots in the Navy during WWII.

3. His rescue from the Pacific was caught on film

Bush was shot down near the island of Chichijimi on September 4th, 1944 in a Grumman TBM Avenger. Bloody and disoriented from jumping out of the burning plane, the 20 year old pilot managed to secure a raft and stay afloat. He did not think he would survive. Fortunately for him a submarine, the USS Finback, emerged a few hours later to bring him on board. The famous rescue of the future president was caught on film. This emotional moment would be played back for massive audiences many times, most notably during Bush’s campaign for the presidency.

2. He celebrated birthdays by going skydiving

He may have been wheelchair bound, but the man could still fly! At 75, Bush celebrated his birthday by skydiving. This was his second dive; his first being that fateful day in 1944. He would go on to do celebrate his birthday this way on his 80th, 85th, and 90th birthdays. What a way to celebrate a long life!

1. He never considered himself a hero

George H. W. Bush was forever haunted by the “what if” of September 4th, 1944. Both of his crew members, Radioman Second Class John Delaney and Lt.(jg) William White, perished, and Bush would wonder to the end of his days what he could have done better in the moment. He felt that he was no hero, but with 58 combat missions flown and a distinguished flying cross, 3 air medals, and a presidential unit citation, he played his part in the war with honor and dignity. Moreover, many consider him to have the strongest resume of any United States President.