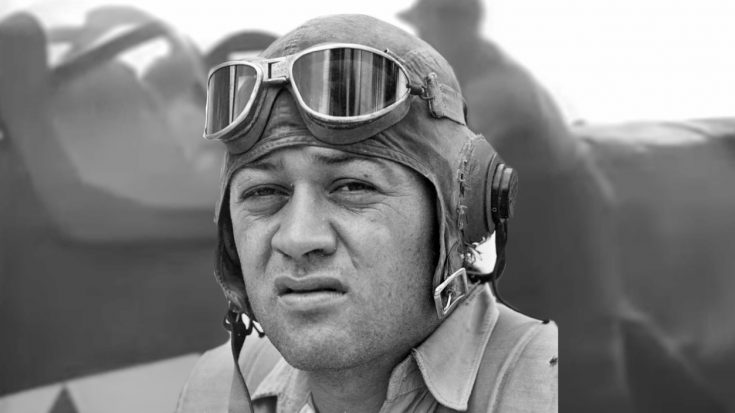 Gregory “Pappy” Boyington was a larger than life character. The boisterous, heavy drinking, wrestling champion, Sioux-Irish American pilot flew his way into fame with gutsy heroics, inspiring  the 1970s TV show “Baa Baa Black Sheep” and earning him both the Medal of Honor and Red Cross. He was, if a little unconventional, an extraordinary man. Here are 5 things you might not have known about his wild life from 1912-1988:

5. He had two identities

Boyington applied for flight training under the Aviation Cadet Act in 1935. However, he had married 17 year old Helen Clark the year before and was ineligible as a married man. Up until that point he had used the name Gregory Hallenback. All along, he had assumed that his stepfather, Ellsworth J. Hallenback, was his father.

In fact, his parents had divorced when he was an infant and his real father was Charles Boyington, a dentist. When he obtained his birth certificate with the last name Boyington, there was no record of his marriage and he was able to enroll as a a U.S. Marine Corps Aviation pilot. This odd mixup proved to be a loophole that set in motion the trajectory of Boyington’s life.

4. He got out of being court-martialed

Boyington’s rambunctious behavior routinely got him into trouble with the commander of the Flying Tigers, Claire Chennault, and with the executive officer, Harvey Greenlaw. Chennault even placed a 2-drink maximum on Boyington’s nights out and, according to Boyington, had spies watch him.

Boyington said of Chenault: “He was less than pleased with some of our antics, such as shooting down the telephone lines with our .45s on the train to our billets, holding water buffalo races and rodeos in the street, or shooting up the chandeliers in a bar when they quit serving us.”

But he also had more noble causes for getting upset with Chenault; Chenault wanted more ground attack missions. These orders would cost aircraft and pilots and Boyington did not see them as worth it. Chenault also informed Boyington that he would be inducted as a lieutenant in the Army Air Corps once the AVG disbanded in 1942. Boyington did not appreciate this as he had been promised a major’s commission with the Marine Corps. He broke his contract and literally escaped back to the U.S on his own.

As for Harvey Greenlaw, who had prepared court martial paperwork for Boyington, Boyington offered him a few rounds of a fight and a mention of accidental Japanese bombs. After that, the court martial threats ceased.

3. An ankle injury led to the formation of the Black Sheep

Boyington almost had his combat career ruined by breaking his ankle in 1943 while commanding in Guadalcanal. He was sent to New Zealand to recuperate and then bounced around squadrons for a while with a non-flying status. Ironically, his work consisted of processing disciplinary paperwork for officers and enlisted men. It was at this time he decided that he wanted to form his own squadron.

Originally called the “Swashbucklers,” someone suggested that they be known as “Boyington’s Bastards.” Realizing that this name wouldn’t fly, Boyington chose to call them “Black Sheep”. Nearly a decade older than his squadron, they dubbed Boyington “Gramps.” This later morphed into “Pappy.”

2.  He experienced a family tragedy

Boyington married four times. His first wife, Helen Clark, was just 17 when they tied the knot. They had three children together, but when Boyington returned in 1941 after flying with the Flying Tigers, he charged Helen with neglecting the children. Sadly, one his daughters, Janet, would go on to take her own life. He married Frances Baker in 1946, Delores Tatum in 1959, and Josephine Wilson Moseman in 1978. He and Delores had adopted a child together.

1. He credits his time as a POW for a longer lifespan

Boyington was beaten and abused as a prisoner of war. Yet, he holds no grudges, and even remembered certain individuals with gratitude. The men on the submarine who picked him up from the ocean fixed him up. There was an interpreter educated in Honolulu who worked to save his life and the lives of many others. The old lady he worked for in the kitchen took good care of him. Even the malnourished locals would slip the prisoners food.

And in 20 months, except for New Year’s Eve in 1944, he did not drink. Forced into sobriety, he believed the lack of alcohol was partially responsible for a longer life. Maybe that and he had little chance to pull off shenanigans.