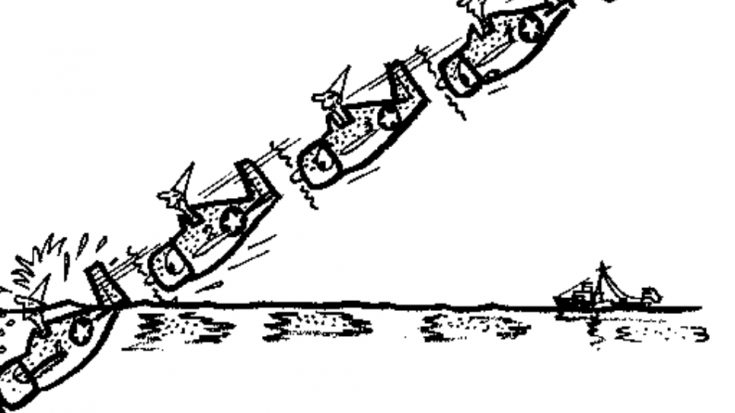 The Navy had a huge problem. While pilots-in-training were brave and noble, they still had tendencies to do things that were, well, stupid. After all, many of them were just teenagers.

“Flat Hatting” was one of those things. The Navy was understandably upset that young men were needlessly risking their lives and destroying expensive planes with the cheap thrills of flying dangerously low.

To combat the annoying trend, the Navy issued manuals. But these weren’t like the manuals that come with your TV mount. Essentially, they were brilliant cartoons.

With their dark humor (on a very serious topic) and illustrations, it’s nearly impossible to not want to read them all the way through. Here are 6 fantastic quotes from Flat-Hatting Sense:

There can be little doubt that no matter how much your girl enjoys your Flat-Hatting she would prefer to have you alive. Even an aviator does not make a very lively corpse.

The manual uses a cheerful tone while repeatedly trying to knock one important concept into future-pilots heads: Flat-hatting will likely kill you. Don’t do it.

One minute you’re feeling wonderful and the next minute your mortal coil has come to rest in a cornfield while your spiritual self has begun to gain altitude rapidly. Your rate of climb in a case of this kind will amaze you, but unless you are rejected by St. Peter you won’t be able to get back down.

Who knew Navy literature could be so poetic? These words are just heavenly.

When an airplane goes into a spin at 100 feet, it generally keeps spinning for about 103 feet, which includes three feet of earth. Pilots have found that bailing out during this kind of a maneuver presents difficulties; the men who have been able to get out of their cockpits have had little use for their parachutes.

This manual seems to also be encouraging young pilots to use their math skills. If you are negative three feet in the sky, are you still alive? Nope.

Even the discipline-minded Germans, who are less inclined to be frolicsome than many, have their troubles with Flat-Hatting, or as they call it; Flugenkerflatzmittendorfergesellshafftvereingang.

Is that even a real word? Actually, sort of.  It means “flying smack into the middle of the village.” Did the Navy just trick thousands of trainees into 5 minutes of trying to pronounce it? Well played, Navy.

A variation of this nuisance is “rat racing,” another kind of follow the leader. Often upwards of five or six dunces engage in this sport, rushing pell-mell over the countryside, oding twists, turns, banks, rolls, and dives, each flyer trying to shake off the man behind him. Sometimes as high as 20 percent of the participants return home in one piece.

20%! We’re being positive about this. But most likely you’re all the way dead or there’s half of you left.

SO: If you have to play, buy a Yo-Yo or an electric train. But when you climb into that plane, get down to business.

The Navy gets it. Games are the best. But Yo-Yos are decidedly less expensive than planes and the investment in training.