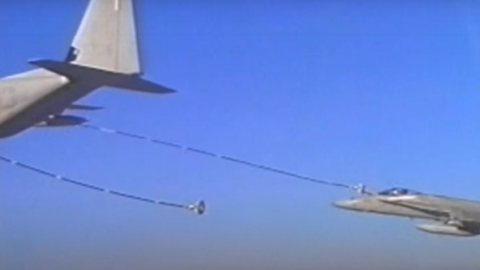 Not Everything Works Perfectly Every Time.

Aerial refueling is a key strategic advantage when it comes to air warfare. First off, air supremacy is paramount when fighting a war, a lesson we learned well all to well during World War II. He who controls the skies is not only intimidating but also opens up a ton of other options when it comes to fighting and supporting ground troops.

Having said that, the invention of air to air refueling extended the flight time of both fighters and bombers. Bombers are able to fly further without landing and fighters are able to linger where they’re needed for longer stretches of time. Combined, this simple invention made a lasting impression on how we fly today.

As a quick history note, aerial refueling was actually invented in 1923. It was of course primitive to what we use today, but it did pave the way as technology was trying to meet the new demands of progressing aviation.

Nowadays we have two main techniques when doing this. One is a boom system and the other a probe-and-drogue system. For those of you who don’t know, the flying boom is basically a telescoping tube which transfers the fuel and needs an operator. The latter system is a flexible hose which requires the receiving plane to attach itself to.

These contraptions are quite clever and have worked for years. Things however, don’t always go as planned.