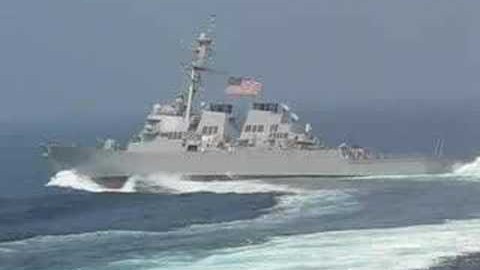 In The Middle Of That Turn It Almost Looks Like It’ll Tip Over.

This eye opening footage was taken off the coast of Norfolk in 2007 and shows a destroyer taking ‘evasive action.’ Now, if you don’t know anything about military vessels, you really don’t have to in order to be impressed.

The only thing you have to know is that fully loaded this ship weighs almost 9,000 tons, but still manages to do a complete 180 degree turn in under one minute. We know drivers who can’t do that with a car in a parking lot!

The ship in this video is USS Gonzalez, a Arleigh Burke-class destroyer.

The Arleigh Burke-class was named after the most famous World War II destoryer officer who later became Chief of Naval Operations. These ships were built as multi-role destroyers, serving as anti-submarine, anti-aircraft and anti-surface warfare vessels. USS Gonzalez, designated DDG-66, was itself built in 1995 and is in service as of this writing.