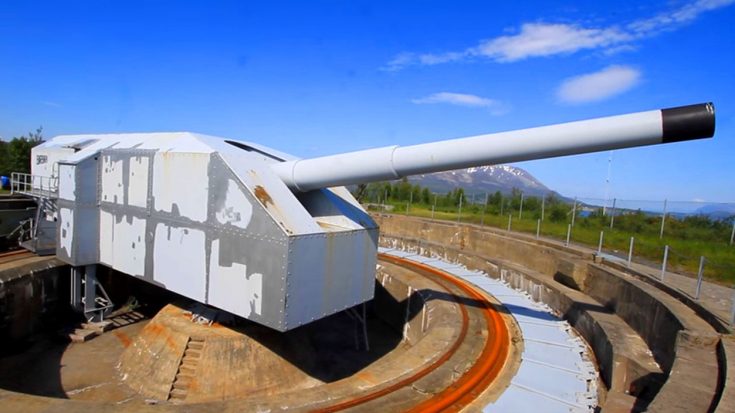 The Atlantic Wall erected by Nazi was probably the most impressive defensive barrier in recorded history. A massive barricade of mines, pillboxes, and artillery that spanned from Spain to the northern tip of Sweden to prevent an Allied invasion. Many powerful weapons were installed along the Atlantic Wall but none were as big and powerful as the gigantic Adolfkanone (Adolf Cannon).

Named in honor of the fuehrer, the Adolf Connon was originally conceived by the Germans to create the turrets for the world’s biggest tank and Gneisenau-class battleships. Ultimately the giant tank project was canceled when it was partially completed after realizing the vulnerability to Allied bombers. They chose not to scrap the completed turret and mounted it on a hillside in Norway where it became the biggest land mounted gun in history.

Strategically placed along Norway’s coast the Adolf Cannon could be positioned to target approaching naval vessels. Seven of them were built in total as the biggest defensive weapons along the Atlantic Wall. They don’t make em like they used to is actually true when it comes to the Adolf Cannon because after 75 years it is still operational as you can view in this clip.