8 Bizarre Uses For Airplanes – You Might Scratch Your Head 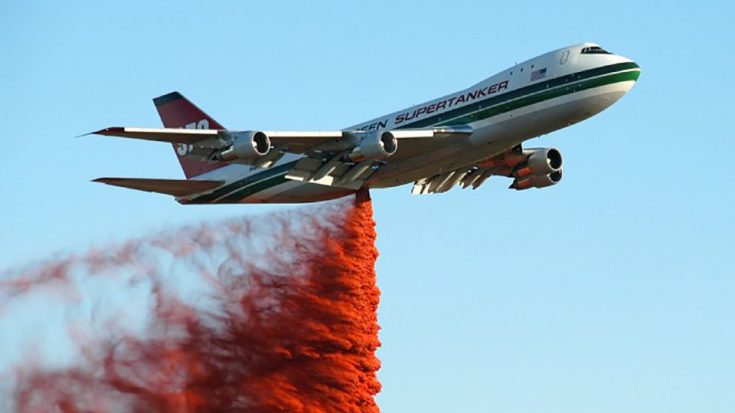 More than just for transportation, airplanes have proven to be versatile. Aside from carrying passengers and huge amount of cargo, the following functions will blow you away:

Fire aviation is a concept not everyone is familiar with. The DC-10 Air Tanker has been in service since 2006, serving as an aerial firefighting airplane. These are developed from the McDonnell Douglas DC-10 passenger jetliners. The capacity of the exterior belly-mounted tank is 12,000 US gallons (45,000 liters) of water or fire retardant which can be dumped by the turbofan-powered aircraft in just eight seconds. The three centerline belly tanks contain internal baffles which help in preventing the fluid shift during flight. While the aircraft is still on the ground, all three tanks can be simultaneously filled up in just eight minutes. There are those who weren’t impressed by the DC-10’s maneuverability but then again, it has proven its agility no matter what terrain is under it. Only one drop from the DC-10 Air Tanker is equivalent to approximately 12 drops from another firefighting aircraft – the Grumman S-2 Tracker.

How far would you go for an aerial adventure? If you have money to spare, say around $135K, you might want to check out the Four Seasons Private Jet. This reconfigured Boeing 757-200ER has undergone a multimillion conversion so it can take 52 passengers to a luxury group tour like no other. They offer personalized itineraries with trips from world-renowned restaurants to the most exquisite islands. The in-flight dining meals are superb too since Executive Chef Kerry Sear makes sure they meet all the guests’ culinary expectations. What are the staples? Dom Pérignon champagne and Petrossian caviar. But if someone wants a beer, they can have it too. The interiors don’t disappoint too – there are plush, white leather seats with a personal control panel. Before the trip, passengers get an iPad Air 2 and once they board the plane, they get Bose headphones, Bvlgari Toiletry Kit, a cashmere blanket and a custom-made Moleskin travel journal.

This is a converted FedEx McDonnell Douglas DC-10 but it’s not just any other aircraft because inside, it’s an eye hospital and also doubles as a medical teaching facility. Aside from the trainings, it also provides surgical supplies and equipment to local medical teams. The first two Flying Eye Hospitals were refurbished Douglas DC-8-21 (N220RB) and DC-10. The latter was remarkably bigger than the former in terms of internal space. The non-profit non-governmental organization Orbis International operates various hospital-based programs all over the world but they are widely associated with their famous Flying Eye Hospital. This aims to bring the most advanced trainings to medical professionals such as doctors and nurses located in developing countries. Aside from classrooms, the aircraft also features operating theaters and even laser rooms. The McDonnell Douglas DC-10 donated by FedEx is their third generation Flying Eye Hospital and features include having its own water treatment plant.

Scaled Composites built a vehicle that’s going to take you to space. The Model 348 White Knight Two (WK2) is a jet-powered, four-engine (Pratt & Whitney Canada PW308), dual fuselage flying space aircraft carrier. It was developed as the first of two stages in the suborbital-space manned launch system. Aside from launching payloads (it can carry an aircraft up to ~50,000 feet in order to ensure a safe and effective launch), it also operates as a zero gravity aircraft for the training of passengers with a service ceiling of around 18 km. In terms of its wingspan, the White Knight Two has similar features to that of the Boeing B-29 Fortress with measurements of 141 ft 1 in (43 m). The first WK2 was called VMS Eve after Virgin Group Founder Richard Branson’s mother. It underwent an extensive flight test program which was completed by September 2009, it had twenty flights in less than a year.

NASA uses a modified DC-8 airborne science laboratory to conduct data collection, validation and refinement for their programs and experiments. For example, in 2014, there was a high-tech global precipitation management satellite (under the OLYMPEX project) launched which could quantify the snowfall and rain anywhere in the world. Its first flight happened on the very same year that man landed on the moon. The aircraft in current located in Palmdale, California at the NASA Armstrong Flight Research Center facility. The people allowed to use this DC-8 include federal, state, academic and foreign investigators. Aside from the basic research studies of our planet’s atmosphere and surface, other missions of the DC-8 aircraft are sensor development, satellite sensor verification, space vehicle launch or re-entry telemetry data retrieval and optical tracking. Although it was built in 1969, NASA was able to acquire it only in 1985. It is capable of flying for up to 12 hours.

It’s safe to say we’re all a little bit curious what it feels like to experience weightlessness or zero gravity. It’s going to feel like you’re no longer on Earth and well, if you’ve always wanted to fly, then this is your chance. For $4950, you get to enjoy 15 parabolic maneuvers and photos and videos to document the whole once-in-a-lifetime experience. Yes, it goes without saying that you earn some serious bragging rights too. The Zero G company uses a modified Boeing 727 called ‘G FORCE ONE’. It’s not a simulation, by the way. This is the real thing. The program is led by an experienced astronaut and the guests will get to experience the Martian gravity and Lunar gravity in addition to the weightlessness. Passengers are flown 22,000 to 32,000 feet altitude high above the Earth. It’s exhilarating to say the least and well, we can’t wait to try it out.

To any aviation enthusiast, this is common knowledge. But to most people, this may come as a bit surprising. Like seriously, who would have thought an aircraft also doubles as a gas station to refuel other birds in mid-air? That sounds like a scene straight from a Hollywood movie. But as it happens, there are plenty of planes with this function. You see, any aerial refueling aircraft is a huge strategic asset for militaries anywhere in the world. Its presence allows extended missions or basically just helping the receiver stay airborne and do their job longer since the tanker prolongs the flight time. Those with limited range can highly benefit from this. For one, the Airbus A330-200 Multi Role Tanker Transport can hold around 111t (245,000lb) of fuel in addition to 45t of cargo. The Boeing KC-135 Stratotanker, on the other hand, can carry 90,718.4kg (200,000lb) of fuel load and transfer it through the flying boom.

What makes flying over Antarctica great? It’s the view – spectacular, breathtaking and awe-inspiring. There’s nothing quite like this journey. The Qantas 747-400 will be taking the guests on a glamorous sightseeing tour across the continent on a 12-hour flight. There’s no better way to go on a luxurious excursion than holding a glass of champagne while you’re at it. In some cases, there’s even a jazz band on-board to complete the whole experience. Of course, price varies depending on where you’re seated. Premium seats can go as high as $7999. You might think, ‘What’s the point of taking the tour if you’re sitting on the center row?’ Well, as it happens, halfway through the journey, the seats will be rotated so everyone will get the chance to see the stellar view down below. You know what else looks amazing? It’s the sunset. If you’re thinking of booking a ticket, you might need to stay in the waiting list first.