9 WWII Warbird Tattoos You Wish You Thought Of 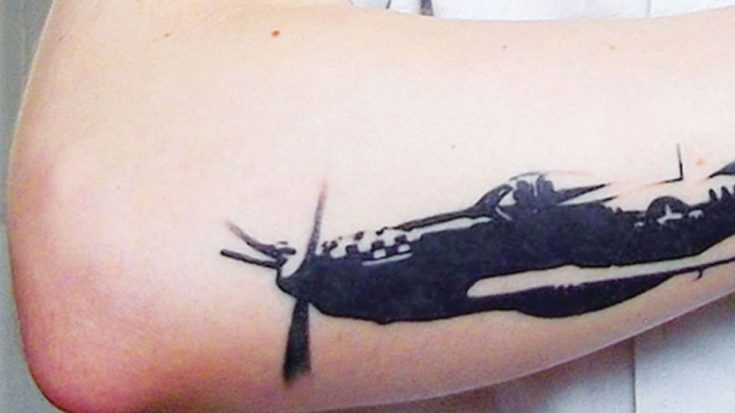 Really Personal Homages To The Things They Love.

Here’s a series of really neat tattoos we handpicked. They feature World War II planes that spoke to the people who got them, be it a personal connection or just their love for the warbirds. They’re pretty neat, so take a look and see what you think. Maybe you’ll be inspired to get one. 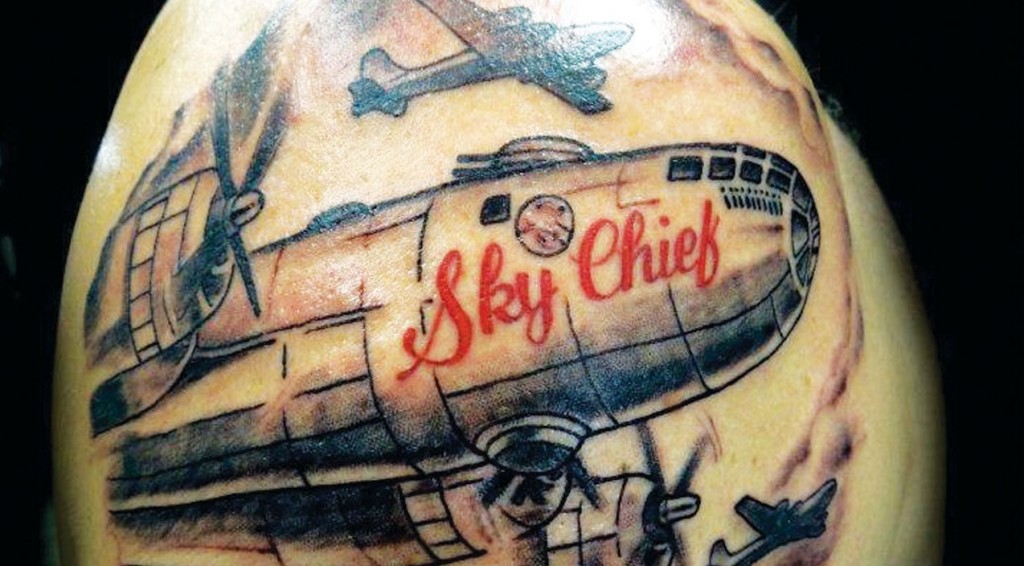 The famous B-29 Superfortress. Not only is this an iconic plane for many reasons, this guy probably got this for personal reasons. With the name Sky Chief displayed prominently in the center of his shoulder, he’s probably commemorating someone who was a part of the crew. 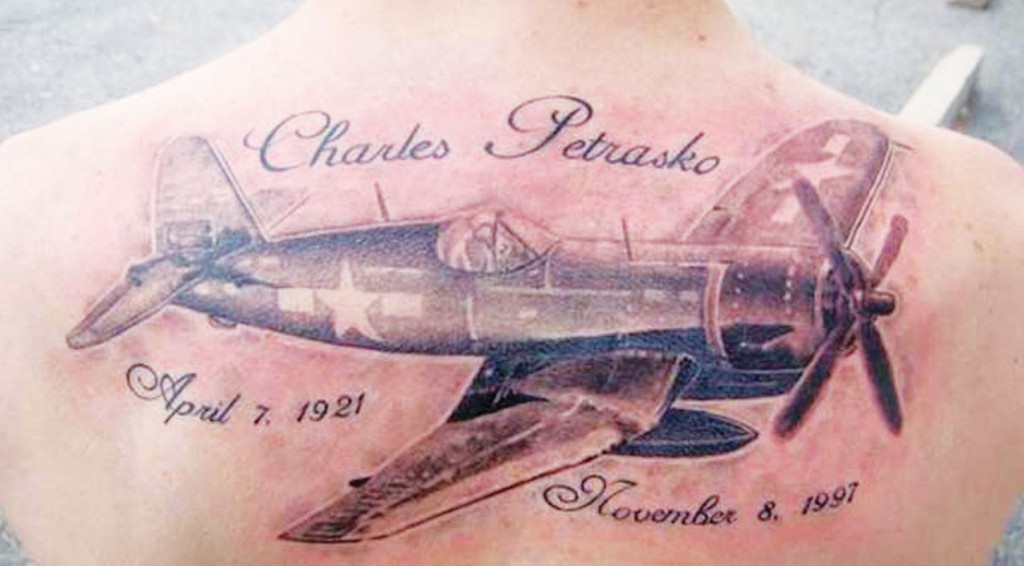 Speaking of personal, this one certainly is. With the name on top and birthdate and date of passing on the bottom, whoever got this was probably related to this pilot. On top of that, it honors a Corsair pilot, so you got to love that. That’s one plane most wouldn’t mind getting a tattoo of. 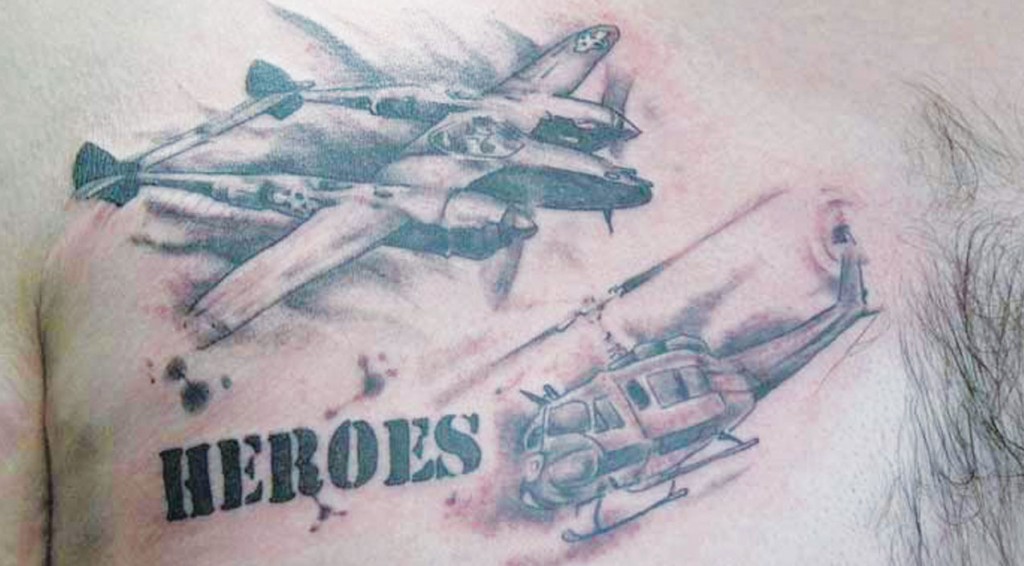 This guy loves aviation in general as he picked two of the most iconic aircraft from two very different wars. On top, you have the P-38 Lightning, a plane that was feared by the Japanese airmen in the Pacific during World War II. Right underneath you have a UH-1 Huey, one of the most important helos for inserting and extracting troops from Vietnam (among other places of course.) All in all, this guy must be a fan of the Pacific Theater. 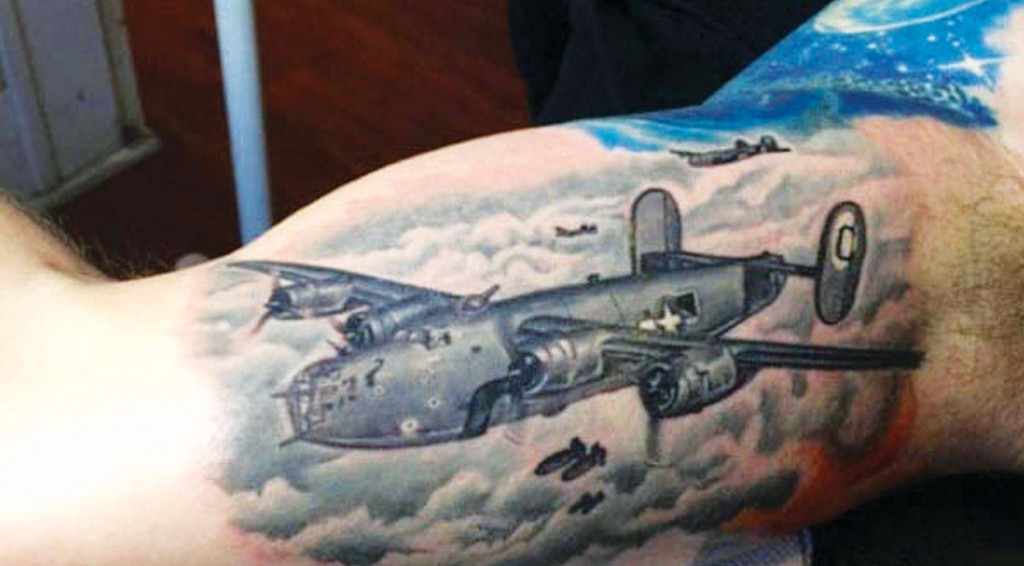 Whoever got this knew the significance of this bomber during World War II. The B-24 Liberator was the highest produced Allied bomber during the war. Most people think it was the B-17 Flying Fortress but although it was more widely known, it wasn’t the most produced. Simple but beautiful tattoo though. 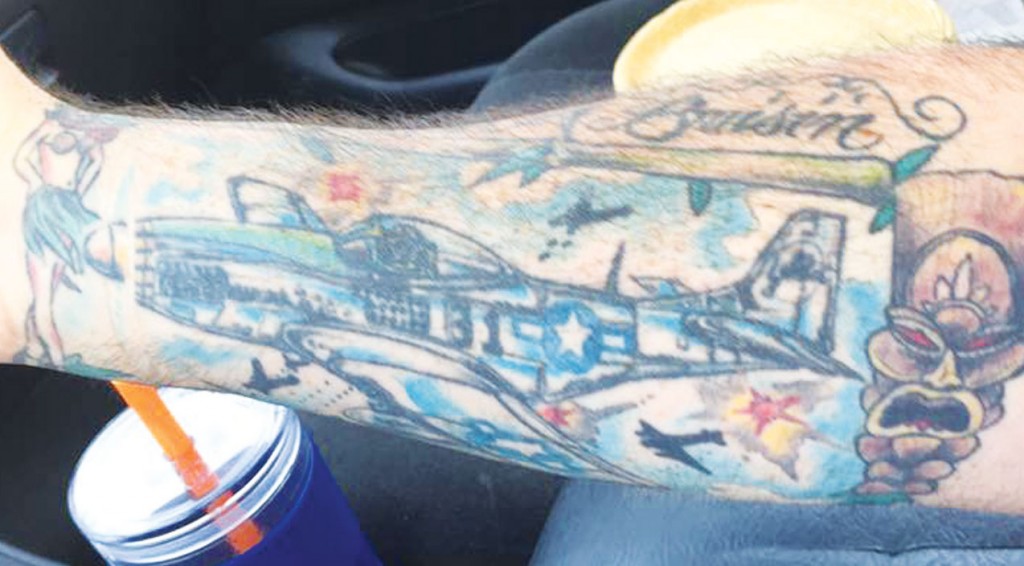 This tattoo is actually the inspiration for this list. One of our Facebook fans by the name of Jason posted this picture of his tat on one of our P-51 videos. We thought, “man, that’s pretty cool,” and asked him if we could post his picture. Then we figured we should do a whole list of a bunch of them. Now, we’re all here. 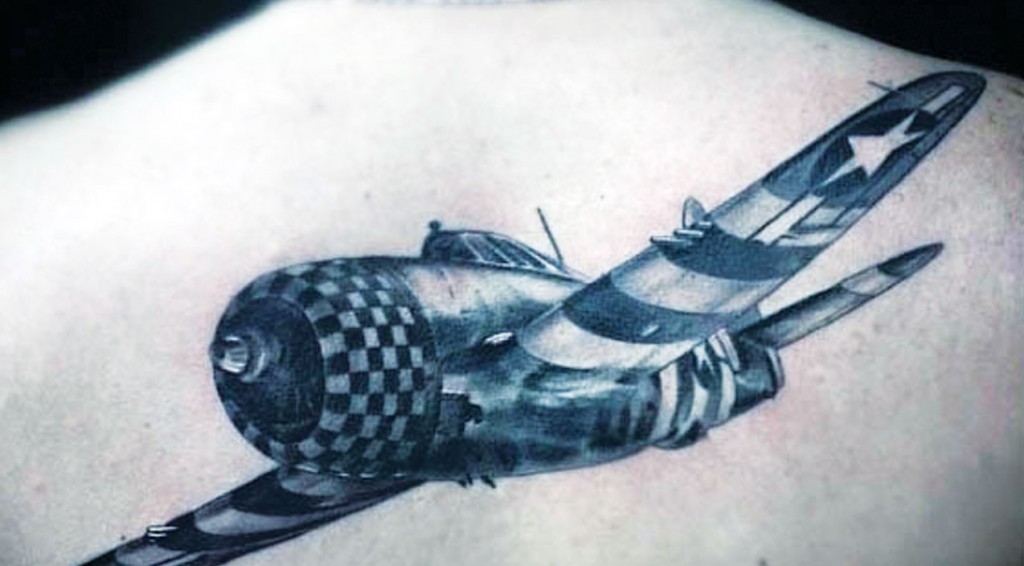 This is probably one of our favorites. Not only because it’s a P-47 Thunderbolt but because of the way it looks. Sure, we love that warbird and think it’s awesome but man, the tattoo artist did a great job making it come to life. 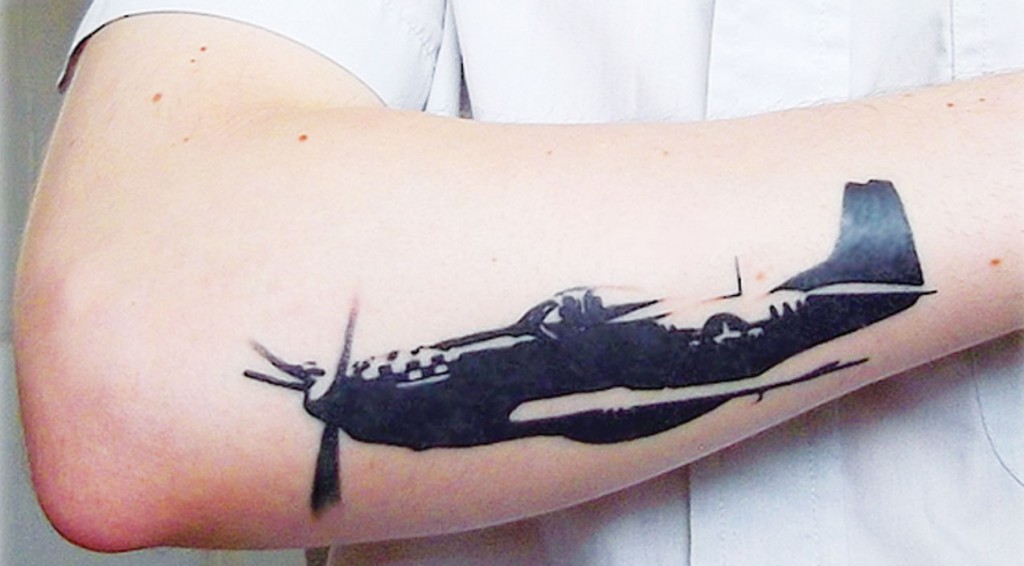 This one’s minimal and one color but that’s why we like it. Featuring a P-51 Mustang (apparently a favorite among warbird lovers as we’ve seen many of them,) this guy got it in a pretty neat spot. Although mostly out of sight, when you sit down and lean on a table you can see it. We love that. 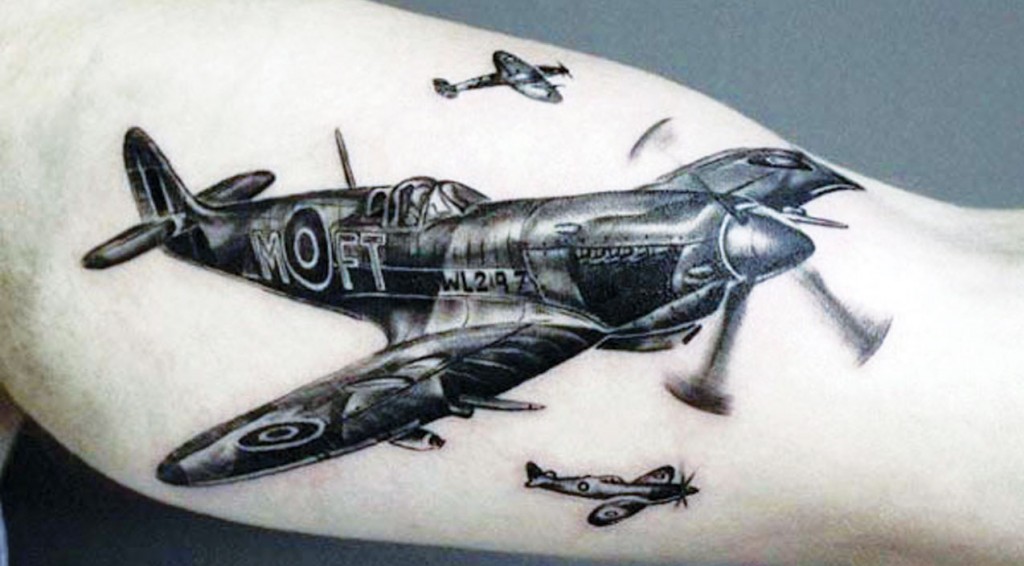 Let’s not leave out the Brit planes out of this. Supermarine Spitfires did a tremendous job during World War II. Keeping the Luftwaffe out of British skies by brute force, the Nazi’s eventually gave up their fight for air superiority over there. Although Hurricanes had a lot to do with it as well as other planes, Spits do hold a special place in peoples’ hearts. 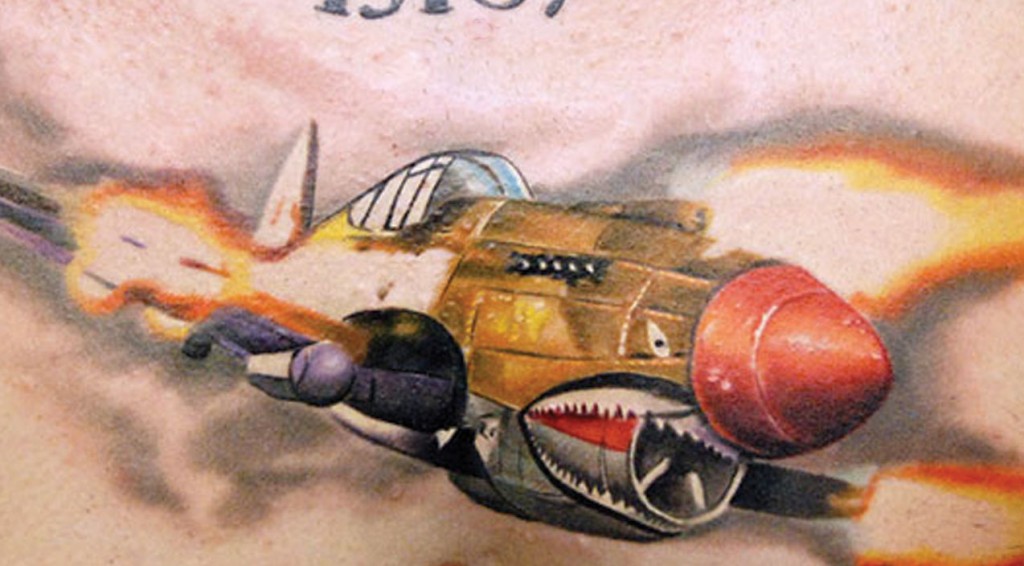 Finally, the color tat of the P-40 Warhawk. Although we appreciate the simplicity of the single colored tattoos, this one is pretty awesome. With the shadowing and the cannons going off, this one definitely draws attention. Good job to whoever drew this up.