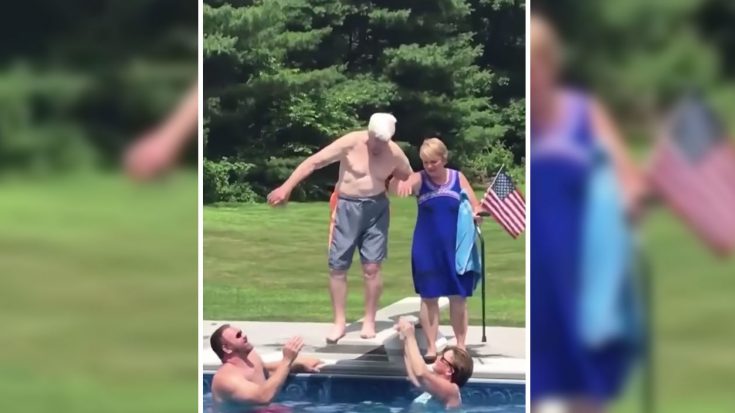 Meet Daniel Biss, a 95-year-old Air Force veteran not only of World War II but also of the Korean War. A resident of Ohio, he was enjoying a day in an Ohio public park when he spotted a young boy afraid of going into the pool. No stranger to facing his fears, Biss took it upon himself to show the him there was nothing to be afraid of.

Using a cane which he needs to walk, he was guided by a family member onto the diving board. Making several uneasy steps to its end, he didn’t miss the opportunity to first flex his muscles in a comical fashion, showing everyone he’s still got it.

His grandson, Kevin Ross and another family member were in the pool to assist him getting in, but Biss had plans of his own. He just took off the diving board, his grandson later saying, “Little did we know he would actually dive.”

And dive he did, certainly showing the little boy that if a 95-year-young man can do it, there’s nothing to be afraid of. It scared his whole family a little, but he resurfaced unscathed just as he planned.

So far, the video has been viewed millions of times, hopefully inspiring people to take a plunge of their own, no matter in what form.