A-10 Flybys – See The Graceful Side Of This Killing Machine 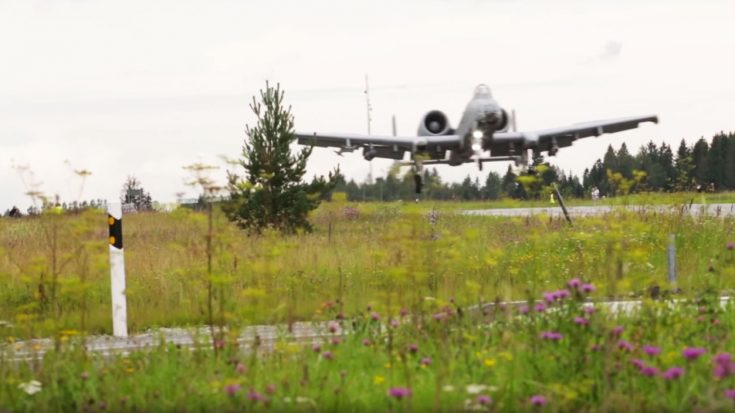 For over 40 years the A-10 Warthog has been one of the most fearsome weapons of war. Designed for close combat it has no trouble taking on tanks due to its resistance to heavy bullets and explosions. The A-10 is essentially a huge 30 mm GAU-8/A Avenger Gatling-type cannon that flies. The 30 mm cannon is capable of firing 3,900 rounds per minute with amazing accuracy. Warthogs have been a mainstay of the army since the Gulf War when they destroyed over 2000 Iraqi Military vehicles. The A-10 has a huge following that has voiced support for it since the Military announced its retirement.

“It’s a highly-efficient tank-killer, its minimal takeoff and landing requirements make it able to function effectively even on the front lines, and it can hold its own on attack and support missions. More than once it’s bailed out U.S. troops who were pinned down by an ambush, and it’s quick turning radius actually allows it to strafe a stationary target twice in under eight seconds.”

Aside from being one of the greatest flying weapons ever created, the A-10 is also a very agile aircraft. Taking on ground assault vehicles and supporting troops calls for low altitude attacks or “strafing”. The weapons usually dominate discussion of the A-10 but the strafing should get people talking. The 303rd Fighter Squadron from Whiteman Air Force Base, Missouri displayed beautiful flybys at Ämari Air Base in Estonia. The Warthog may be a fierce killing machine but you can see here that she is also a graceful aircraft.