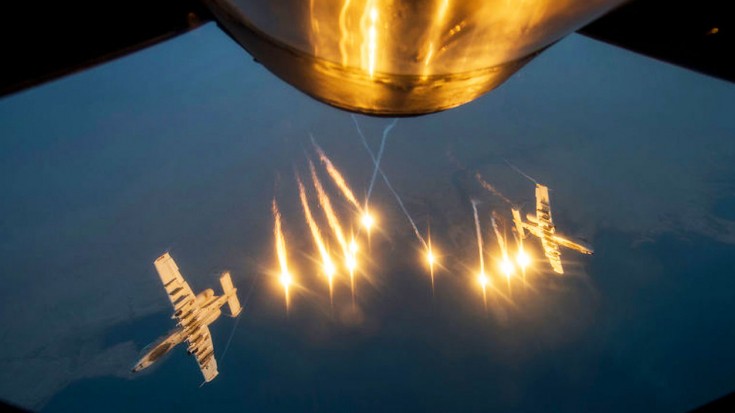 Watching These Precise Crews Is Always A Pleasure.

On October 13th, 2015, two A-10 Warthogs and a B-1 Lancer were over Southwest Asia when they needed some refueling. A well oiled machine, the Air Force had a KC-135 Stratotanker nearby at the ready. One of the crew members on the Stratotanker had his camera ready and provided us with this awesome footage. Not only does the video show the precision it takes for aerial refueling but also treats us to some great shots of our beloved A-10s. The B-1 is pretty awesome too.

The handlebar mustache painted on the front of the A-10 is a tribute to Robin Olds who was a rockstar aviator.

The A-10s and the B-1 are part of the 163rd Expeditionary Fighter Squadron and 37th Bomb Squadron respectively and are taking part in Operation Inherent Resolve. This operation started on June 15th 2014 and is ongoing, serving the purpose of providing airstrikes on ISIL and Al-Qaeda, humanitarian efforts and supporting ground forces. The U.S. controversially refused to officially name this conflict as they simply deemed it as a “deep commitment of the U.S. and partner nations in the region and around the globe to eliminate the terrorist group ISIL and the threat they pose to Iraq, the region and the wider international community.”