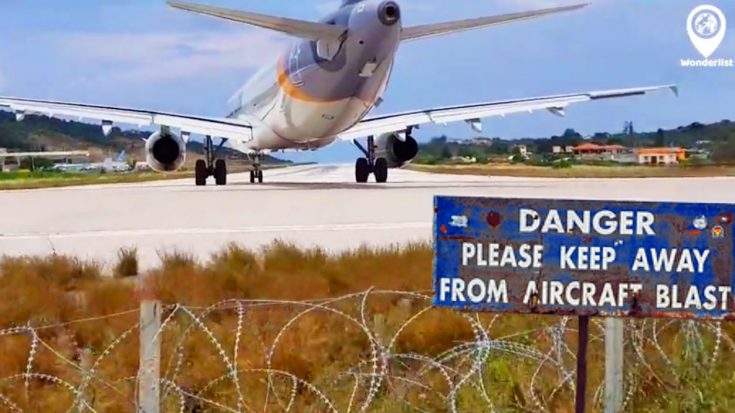 Just a few weeks ago on May 11th, 2018, a tourist by the name of Paul Turner got a chance to see himself (in his own footage) getting himself blown away by the powerful jet blast of a massive airliner. Thankfully he was unhurt and decided to upload it so we can all see the dangers of such an endeavor.

The incident took place at the Skiathos International Airport located in Greece. The island is very small with uneven terrain, forcing engineers to build the runway just 30 feet away from the road and beach nearby.

The thrill of going up to the fence separating the end of the runway is, of course, a pastime of many tourists and beachgoers although it’s not recommended by any means. That’s why there are signs posted everywhere dissuading people from doing so.

The aircraft in this video is an Airbus A321-231. First introduced in 1994, it’s used by many airline companies including American Airlines. It can carry up to 236 passengers but to do so, it needs power.

That’s where its two turbofan engines come in. Built by International Aero Engines, each V2527 engine produces 27,000 lbf of thrust which can easily blow away a tractor-trailer if it got close enough. Now imagine what it can do to people just 30 feet away even at half power.

Although many people do this, hanging out by the fence when an aircraft is taking off can be extremely dangerous. The man in the video was also recording his adventure which means he was only holding to the fence with one hand. That’s why he was so easily blown away when the Airbus’ engines spooled up.

Just last year, there was a similar incident at Sint Maarten in the Caribbean. Also a small island, the runway is set up the same way as this airport and a woman lost her life seeking the same thrills. You can read the full story here.