The Most Absolutely Sickening Weapons Of World War I 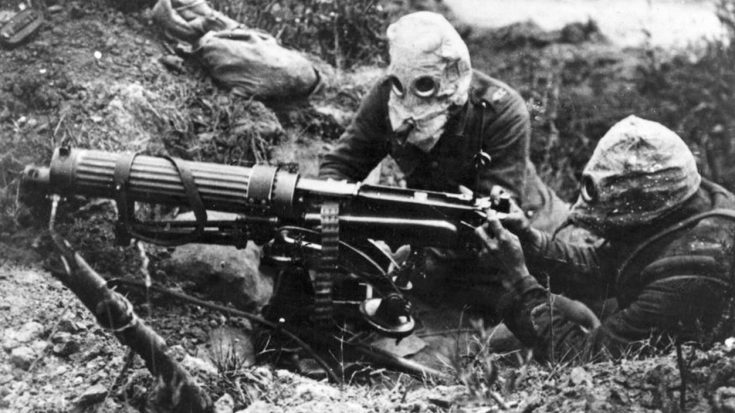 Over the past century, weapons have evolved to become very effective at killing your enemies. But during World War I, the weaponry was effective but it was a lot more brutal. In fact, the methods used during WWI were so twisted that they required the support of the Geneva Convention to ban their use permanently. The first World War gave rise to many new weapons, so let’s take a look at some of them.

Tanks are common in modern warfare but during the first World War, the concept of mechanized warfare was absolutely horrifying when it was brought to life. Trench warfare defined WWI but evading a barrage of bullets to attack enemy soldiers ducking in a trench proved difficult. To overcome the stalemates often brought on by WWI the first tanks were used introduced. These early generation tanks were impervious to bullet fire and could roll over enemy lines and into trenches to crush soldiers.

“The first British tank (“Little Willie”) weighed approximately 14 tons, had a top speed of three mph, and broke down frequently. Improved tanks were deployed during the war, but breakdowns remained a significant problem that led many commanders to believe the tank would never play a major role in warfare. The Germans developed an armored fighting vehicle only in response to the British and French deploying tanks.”

World War I has often been referred to as the chemist’s war, due to the first use of chemical weapons. These were first used by the French in 1914 who used tear gas against the Germans to leave them vulnerable to attack. However, chemical warfare took a turn for the worse in 1915 when German Soldiers began using Mustard Gas. This highly toxic sulfuric gas deeply influenced the war, because you either used it or had to protect yourself from it. A yellow gas with the scent of garlic fills the air causing your lungs would burn, your skin would begin to blister.

“Other nations raced to create their own battlefield gasses, and both sides found ways to increase the severity and duration of the gasses they fired on enemy troop concentrations. Chlorine gas attacked the eyes and respiratory system; mustard gas did the same but also caused blistering on any exposed skin. Comparatively few men died from gas.”

Soldiers began to wear gas masks and use fans to deter the threat of mustard gas, but the imagery of this weapon still provides a haunting memory of WWI. Casualties from chemical weapons may not have been high, but their used was deemed inhumane by the Geneva Protocol and banned their use from any war.

If melting off the skin of an enemy with mustard gas wasn’t enough then the flamethrower could fill the void. Fire has been used in wars for thousands of years, but the flamethrower gave a new sense of control over flame weaponry. Germans were the first to use the flamethrower, setting fire to enemy soldiers and their surroundings to force a retreat.

“Tanks carried on a man’s back used nitrogen pressure to spray fuel oil, which was ignited as it left the muzzle of a small, hand-directed pipe. Over the course of the war, Germany utilized 3,000 Flammenwerfer troops; over 650 flamethrower attacks were made.”

The fear inspired by flamethrowers became a more effective weapon than the fire it sprayed. Although soldiers equipped with these weapons often had a shorter life expectancy due to faulty fuel tanks exploding.

World War I was the first major conflict that saw the use of airplanes. Pilots were known to use pistols and rifles against enemies while in flight, but this was proven to be too dangerous and inaccurate. A French pilot named Roland Garros would soon change the world of aviation towards combat.

Roland Garros’ plane-mounted machine gun successfully shot down five German observation planes, making him the first ace pilot. Unfortunately, Garros encountered a string of bad luck when his plane malfunctioned on April 19th, 1915 and was forced down behind enemy lines. He was unable to destroy his invention before being captured by German soldiers.

After commandeering Roland Garros’ plane the German military sent it off to a nearby aircraft factory operated by Anthony Fokker. Within a 48-hour-period, Fokker had not only reverse engineered the technology but also improved upon it. Anthony Fokker developed a mechanism that allowed the machine gun to fire within rotations of the propeller blades to evade damage. The military quickly dispatched him to test his new weapon.

There were countless other weapons used during the first World War, simple history offers a visual guide to exactly how they were used in combat.