Actual Footage Of The Attack That Avenged Pearl Harbor 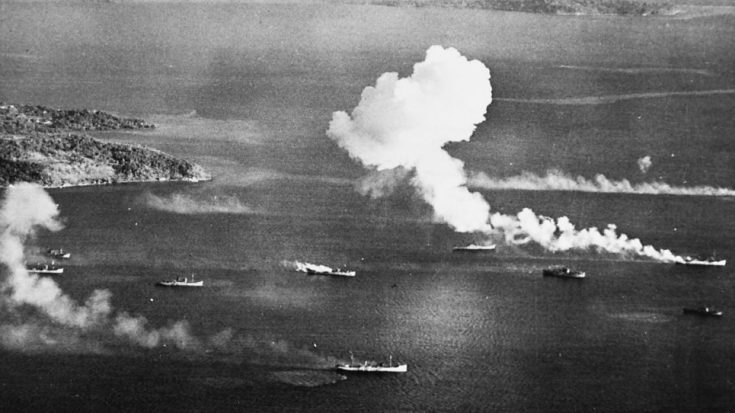 Way out in the Pacific there’s an island by the name of Chuuk (Truk) that is so small that you might not even see it on a map. But this small island is home to a big deal; its lagoon holds the highest concentration of WWII shipwrecks in the world. About 40 Japanese ships- 2 light cruisers, 4 destroyers, 9 auxilary ships, and two dozen cargo vessels now rest just beneath the surface of the sparkling blue waters, the aftermath of the terrific two day surprise attack by the U.S. Navy on the Japanese forces stationed there.

This was Operation Hailstorm.

The lagoon was home to the Japanese Combined Fleet, was a major airfield boasting five airfields and a seaplane base, and served as a critical point for shipping between the Southern Resources Area and Japan. However, the Japanese eventually realized that its proximity to the Marshall islands left it vulnerable to attack. As early as 1943, they began to withdraw their fleet.

But they did not withdraw quickly enough.

On February 17th, 1944, just before daybreak, the U.S Navy launched Operation Hailstorm. The Japanese were taken completely by surprise. The island’s radars could not detect low-flying planes and they had just gone on shore leave. The U.S. Navy fighters in their Grumman F65 Hellcats shot down at least 30 of the few Mitsubishi A6M Zeros that managed to make it into the sky. 250 warplanes on the ground were utterly destroyed before they even had a chance. The attack went on for two days.

With 17,000 tons of stored fuel and 200,000 tons of precious resources destroyed, one tenth of the total Japanese shipping losses from November 1943 and June 1944 were lost due to Operation Hailstorm. The island and the islanders themselves suffered considerably due to the aftermath and isolation after the attack, but Operation Hailstorm played a major part in winning the Pacific.