Actual WWII Footage of the HMS Hood Vs. The Bismarck, Ship Battle 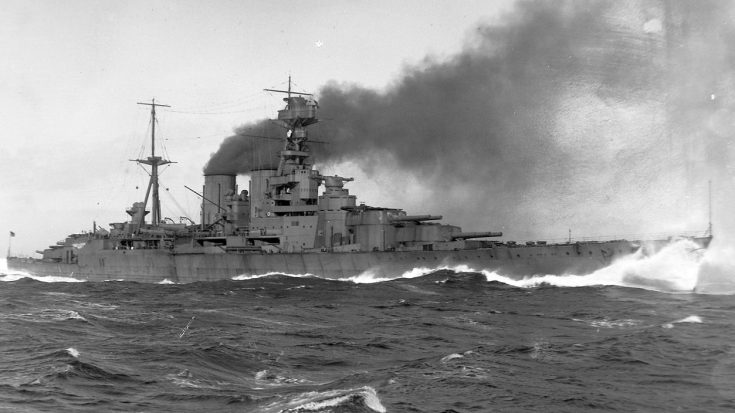 Sink the Bismarck. These three words defined one of the most intense hunts of World War II. Germany’s massive battleship inspired fear everywhere it went and the Royal Navy had to do something about it.

The HMS Hood was the most prominent Battleship in the entirety of the Royal Navy, thus it was best suited to take on the Bismarck. While many believe that Battleships were vastly outdated by the time of WWII, the Bismarck still presented a very real threat to shipping convoys delivering goods to Great Britain.

The HMS Hood alongside the battleship Prince of Wales went out of the hunt for the Bismark. The search for the gigantic battleship proved to be problematic as foggy weather conditions allowed the Bismarck to hide among the Norweigan Fjords. Eventually, reconnaissance planes spotted the Bismark and its companion the heavy cruiser Prinz Eugen and relayed the information to the HMS Hood and they gave chase.

On May 24th, 1941 as dawn broke over the horizon, the HMS Hood engaged the Bismark and Prinz Eugen. The battle was off to a rocky start as the ships mistook the Prinz Eugen for the Bismark and targetted the heavy cruiser instead. Things got worse when one of the Hood’s turrets malfunctioned provoking the captain to use the rear turrets to attack. The repositioning of the HMS Hood would eventually be its undoing and made it a bigger target for the Bismark.

The Bismark landed a shot directly on the Hood’s hull causing its ammunition reserves to burst into a huge pillar of flames. The HMS Hood split in two and sunk to the depths of the Denmark straight taking over 1,000 lives with it. The loss came as a damaging hit on the morale of the people of Great Britain, namely their prime minister.

“I don’t care how you do it. You must sink the Bismarck.”

The film of the fight between the two battleships can be seen in this clip.