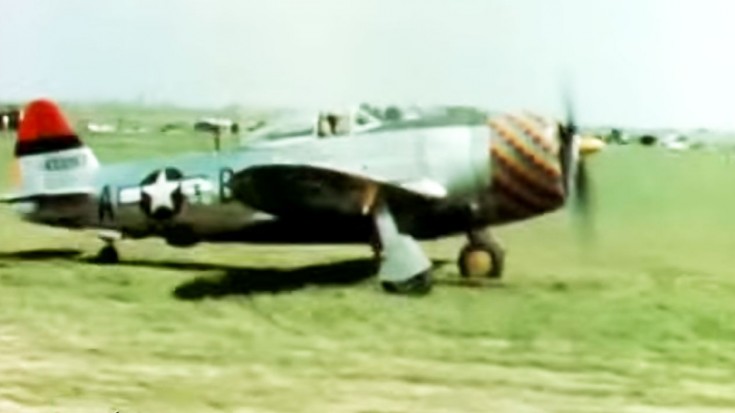 This incredible footage of one of our favorite warbirds is made available because of the Special Film Project 186. From March to July 1945, the United States Army Air Force decided to film the American advance into German territory using about a dozen cameramen. The footage you’ll see here has music laid over it as the 16-mm cameras did not record sound at the time. Also, the new Kodakchrome film which was introduced in 1935 allowed the crews to take color photographs of their advancements.

Special Film Project 186 documented some of the most astonishing low level air raids and bombings of Nazi targets.

This particular footage was shot on May 29th, 1945 and is comprised mostly of Thunderbolts. These P-47s, or Jugs as they were nicknamed, were used extensively during World War II. Fantastic air-to-air fighters, they also served as ground attack aircraft. Capable of loading up 2,500 lbs of bombs, more than half of the payload of a B-17 on a long mission, they were a force to we reckoned with. They were also equipped with 8 M2 Browning machine guns, four on each wing. While strafing, they could collectively shoot over 100 .50 caliber rounds per second.