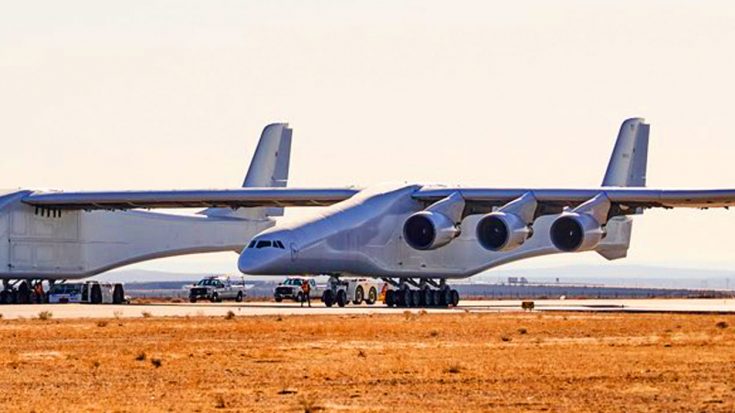 Emerging from a massive hangar, the jet with a 385-foot wingspan dwarfs every other aircraft in design. It has been roughly a year since Stratolaunch the world’s biggest plane made its debut and details have been pretty sparse. Now the announcement has come that the Stratolaunch is finally makings its first flight.

The Stratolaunch project was first announced seven years ago by Microsoft co-founder Paul Allen but it wasn’t until last year when the gigantic plane made its debut. The jet was created with the objective of carrying satellites, rockets and spacecraft into orbit without the need for launch sites.

“We are excited to share for the first time some details about the development of our own, proprietary Stratolaunch launch vehicles, with which we will offer a flexible launch capability unlike any other. Whatever the payload, whatever the orbit, getting your satellite into space will soon be as easy as booking an airline flight.”

The Stratolaunch isn’t the only running in this new space race as it sees competition from Elon Musk’s SpaceX rockets already in use. Other billionaire tycoons like Amazon’s Jeff Bezos have also made the plunge into space with the Blue Origin Rocket and many are left wondering if Stratolaunch still can remain competitive.

The world’s biggest plane has come this far and it is too late to stop, despite having competitors. The Stratolaunch will make its first flight later this year carrying a variety space rockets.