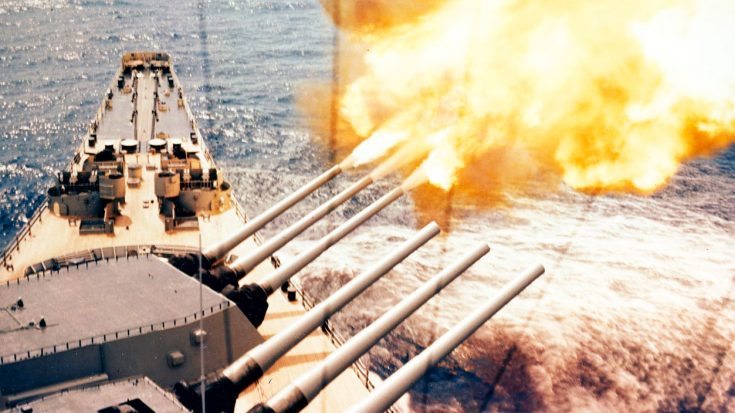 This is one of those stories everyone should know. It’s old, dating back to the Korean War, but when hearing it you can almost put yourself on the decks of those ships and laugh along with everyone who was involved. It all happened during a stressful time but ended up being a story passed down through generations.

USS Wisconsin (BB-64) is an Iowa-class battleship which was launched at the end of World War II in 1944. Although it came late to the war, it did serve in the Pacific Theater and dealt some damage to the Japanese with her 16in Mark 7 guns. The story we’re talking about, however, didn’t happen until she used them again years later.

The ship was decommissioned in 1948 but that status didn’t last long. With the U.S. entering the Korean War just 2 years later, Wisconsin was put back into use and shelled all sorts of enemy positions from the coast. Then, on March 15th, 1952, the ship received its first direct hit.

There were no deaths, however, 3 sailors were injured and there was minimal damage to the ship. The hit came from a Korean 155mm gun battery which got lucky.

The crew of USS Wisconsin, however, returned fire with all of her 9 guns, totally obliterating anything and anyone in the position the hostile shots came from. Right after the shots were fired, a sister ship which was escorting Wisconsin flashed its signal lamp with the words, “Temper, temper,” before continuing on their way.

You can see this beauty fire her guns below just to get an idea what kind of ravaging force these guns fire with. Then, the story makes full sense.