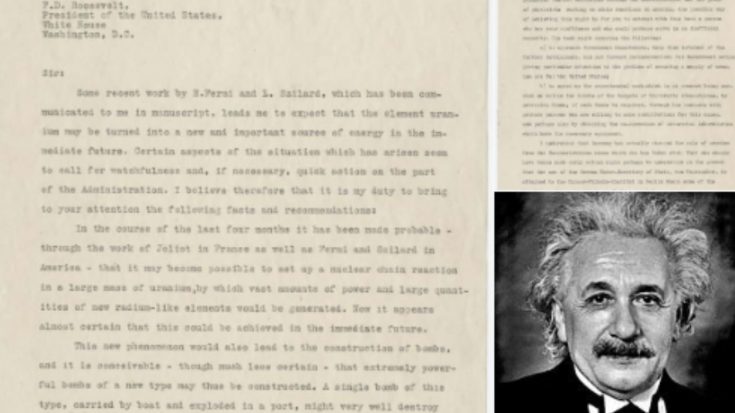 Albert Einstein (March 14, 1879 – April 18, 1955) was a genius scientist, a refugee, and a pacifist. Ironically, the development of the atomic bomb is due in large part to a letter he helped write to President Roosevelt.

Albert Einstein and Leo Szilard re-enact the signing of their famous letter to Franklin D. Roosevelt that helped spur the Manhattan Project pic.twitter.com/TGZdCZOo8a

In 1939, physicist Leo Slizard, along with other Hungarian scientists, was deeply concerned about the Germans’ atomic bomb research. They tried to warn Washington, but had little success. So they approached Einstein.

This put Einstein in a very uncomfortable position. On the one hand, he absolutely hated war and took a strong pacifist stance. On the other hand, Slizard and Eugene Wagner, another refugee scientist, explained what could happen if Germany were to be the first ones to develop atomic bombs. It wasn’t a pretty picture.

Slizard and Wagner managed to convince Einstein to help write a letter to President Roosevelt. He did so with a heavy hand, saying later in life that,

“I made one grave mistake in my life – when I signed the letter to President Roosevelt recommending that atom bombs be made, but there was some justification – the danger that the Germans would make them.”

His letter and meeting with President Roosevelt had a profound impact on the outcome of the war. It sparked the movement that would produce the first nuclear weapons, known as the Manhattan Project.

And we all know what happened next.

It may not have ended the war the way Einstein would have wished, but it did end the war.

#OnThisDay
Albert Einstein passed away 64 years ago today, on April 18, 1955.
He is still going strong…
Even after his death!

Einstein’s desk on day after his death. pic.twitter.com/j3RWKXJh32