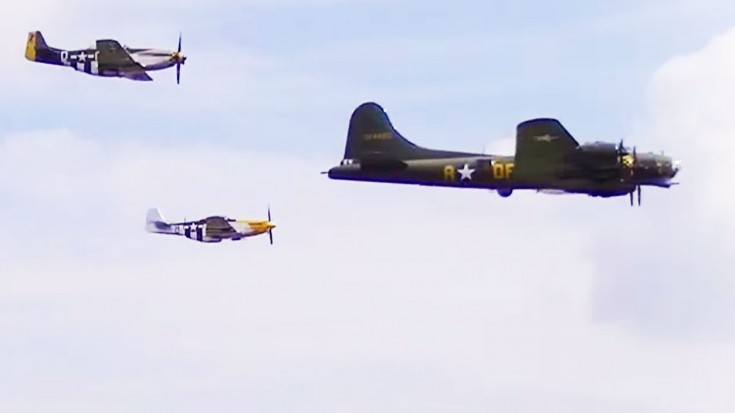 Like In The Old Days, These Birds Make A Great Team

This footage featuring some of the most iconic warbirds of World War II was recorded during the Flying Legends Airshow in 2014. Hosting one of the most exciting airshows in Europe, this annual event is a gathering of some of the rarest and iconic vintage aircraft. In this clip, you’ll see the B-17 Flying Fortress named Sally B as well as two P-51D Mustangs named Miss Velma and Ferocious Frankie.

Sally B is the only airworthy Flying Fortress in Europe and although it resides at the Imperial War Museum Duxford, its maintenance is supported solely through donations.

The other stars of this show are the P-51s that are escorting the Fortress. Miss Velma was built in 1951 in Dallas Texas and was used as a reconnaissance aircraft during the Korean War. She was later modified as a TP variant, meaning that she is now a two seater. Ferocious Frankie on the other hand was built before the end of World War II and served 11 months in England. After that, she was used for air racing and even starred in many Hollywood blockbusters.