B-17 Rumbles Its Smokey Engine 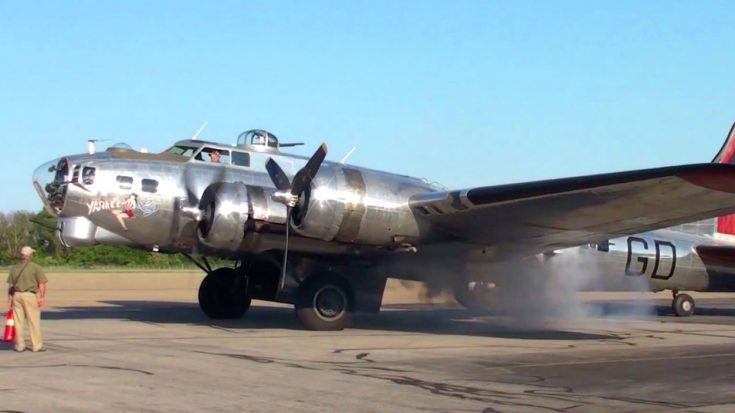 The Boing B-17 Flying Fortress was a staple of the United States Army Air Forces during World War II. One of the most common Heavy Bombers by the Allied Forces they saw combat in against Japanese airfields as well as strategic bombing raids against the Germans.

These planes get their heavy bomber label from the 8,000 lbs bomb payload. Equipped with nine machine guns and heavy armor plating B-17s were known to endure massive damage but still remain airborne.

“In the Pacific, the planes earned a deadly reputation with the Japanese, who dubbed them ‘four-engine fighters.’ The Fortresses were also legendary for their ability to stay in the air after taking brutal poundings.”

Around 12,000 B-17s were built to serve the United States Army Air Forces and the Royal Air Force and they got the job done. Well over 8,000 B-17 bombers were lost in combat missions and most of the remaining models were scrapped or sent to aircraft boneyards after WWII.

Less than 50 B-17s survive to this day so the sight of one in such stellar condition is amazing. The B-17 in this clip gets the respect it deserves and is really dressed to impress as it struts its stuff and an airshow.