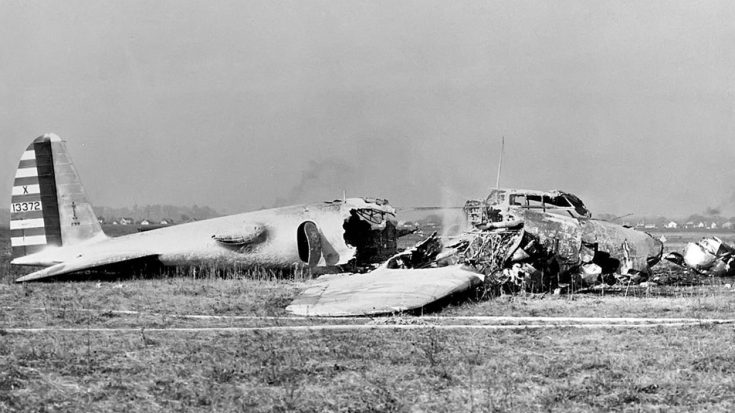 Can You Imagine B-17s Not Fighting In World War II?

As with any plane serving currently or in the past, the United States Air Force conducts “fly-offs” between competing designs. The way this works, in simple terms, is this.

Identifying a problem or need for a new type of plane, the USAF or Navy send off proposals to companies in order to see what they come up with as a solution. To give you the most recent example, the procurement of the F-35 Lightning II was the result of Boeing and Lockheed Martin showing off the capabilities of their prototypes and Lockheed Martin winning the bid. After that, a prototype goes into further design and finally full-scale production.

The same happened back in 1934. Back then there was no Air Force, so the U.S. Army Air Corp as it was called issued a proposal for a new bomber to replace the Martin B-10 (pictured below.)

Thier requirements were as follows:

Three companies were selected for the fly-off. Boeing’s Model 299, Martin’s Model 146 and Douglas’ DB-1. During the first flights, Model 299 superseded almost all of the requirements, blowing their competitors out of the water. Its superior speed and armament were unmatched by the other designs, Boeing’s engineers also stating that it’s the only bomber capable of flight with a failed engine.

Although seemingly in the bag, the second test flight which was needed to complete the evaluation ended in tragedy. The crew forgot to disengage the “gust locks” prior to takeoff causing the plane to crash shortly after leaving the runway (you can read the whole story here.)

Without a second completed evaluation, the USAAC was legally bound to disqualify Boeing’s design and ordered 133 Douglas B-18 Bolos instead (pictured below.)

It wasn’t over for the good ‘ol Fortress though.

Knowing they had a superior design, Boeing kept on dumping its own money into their Model 299. A few months later, the USAAC ordered 13 Y1B-17s (using a legal loophole which allowed them to use the planes although they were technically owned by Boeing) for service testing.

Delivered to the 2nd Bombardment Group in Virginia in 1937, they were tested and improved upon by crews, their performance quickly casting away any shadow of a doubt that they were superior to the Bolo. They were redesignated to B-17 Flying Fortress in 1939 making them officially operational.

More variants of the plane were produced as time went by to make them more efficient for different mission types, and eventually well over 12,000 B-17s were produced compared to 350 Douglas B-18 Bolos.