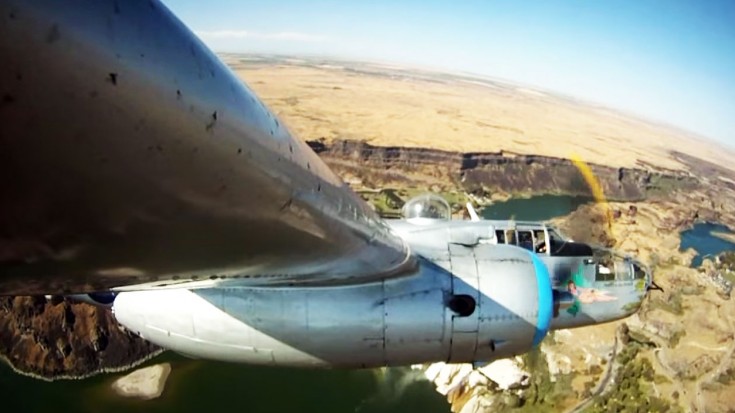 Maid In The Shade is the most recently restored B-25 Mitchell to take to the skies. Built in 1944, she was passed around different squadrons for a few months until she got to her home base with the 319th Bomb Group, 437th Squadron in Corsica, a small French island. Once there, she flew 15 combat missions dropping bombs on strategic targets during the last months of 1944. After her service, she swapped hands numerous times eventually being fitted with an agricultural tank and spray bars. In 1981, she was bought out by the Confederate Air Force which started to restore her.

After 28 long years, Maid In The Shade was finally ready to fly again, her first flight taking place on May 29th, 2009.

Absolutely beautiful to look at, this warbird had to share her restoration time with another bomber which is why it took her so many years to get up and running. The Confederate Air Force also had a B-17 restoration project going at the same time, the end result being Sentimental Journey of which most of us know. Because B-17s are ‘more iconic,’ she took priority over the Mitchell, and got finished first. Nonetheless, the volunteers managed to chip away at restoring Maid In Shade, allowing us to see the fruits of their labor in this awesome video.