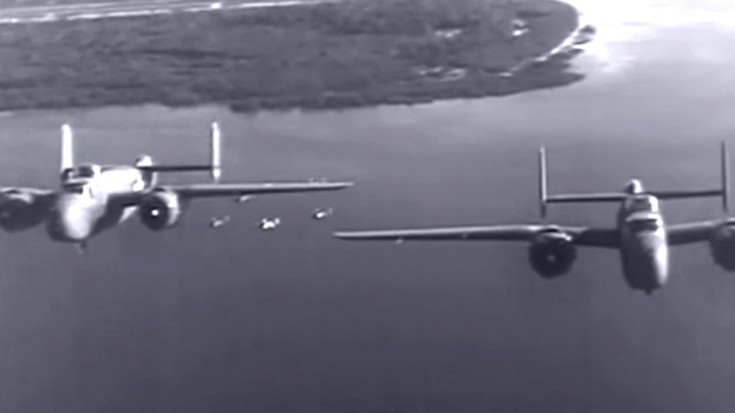 The Bomb Bay Perspective Is Stellar!

This footage from World War II features one of the best medium bombers built during World War II. The B-25 Mitchell, built by North American, served in every theater of the war. Nearly 10,000 of them were manufactured in countless variants as they were extremely adaptable to different mission types.

In this video, you’ll see a squadron of B-25s in different angels during the raid on Borneo. The third largest island in the world, it’s located in Southeast Asia and today is divided between three countries: Malaysia, Brunei and Indonesia. During World War II, it was of course occupied by Japanese forces.

The entire Borneo campaign was officially known as Operation Oboe. This island was particularly important as Borneo was a strategic location and had oil resources. Also, many poorly treated POW were also held on the island, so liberating it had that added benefit.

During the last months of 1944, once south Borneo was captured, North Borneo was under almost constant bombardment, some of which you’ll see in this video. The fighting on the island continued almost until the end of the war when Japan surrendered on September 10th, 1945.