B-29 Takes Off Using 4 Rockets Under Its Wings 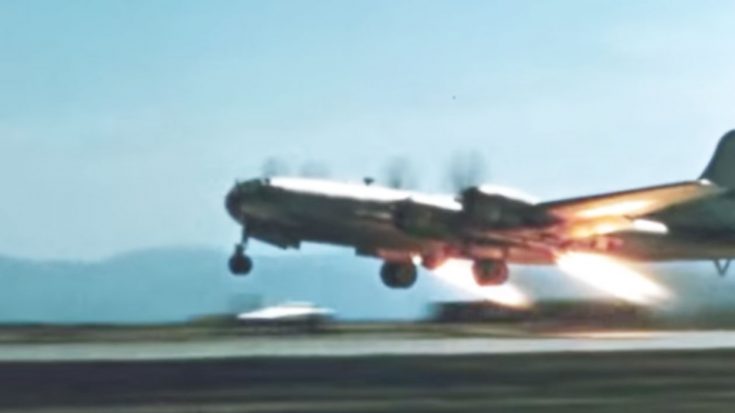 Must Have Been Exciting To Be In That Cockpit.

Jet Assisted Take Off, or JATO, was first considered by the Germans in the early 1930s but didn’t truly get tested until the end of World War II as resources were placed elsewhere. In this clip, you’ll see a post-war B-29 Superfortress used as a test platform for this experiment.

The entire clip is almost 20 minutes long so we’ve queued it up for you to the part where the B-29 crew kicks in the jets and takes off. This way you can see what that looked and sounded like. If you have the time, however, the entire clip is really interesting. It was produced by the Engineering Division of the United States Air Force to teach pilots and their crews about the use of this then-new technology.

We’ll let the narrator do most of the talking as the video is very informative, but all you do have to know is that the 4 rockets placed under the wings added a whopping 16,000 lbs. of thrust. Because of this, the B-29 could take off in almost half the distance if the weight of the plane was the same, or, it could take off in the same distance but with 40,000 lbs. of additional cargo.