B-36 Take Off and Flight In Color 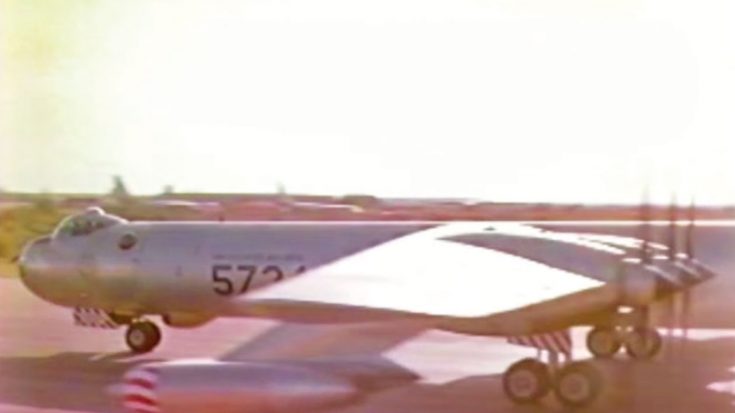 This plane, although introduced in 1949, still holds some impressive records. It’s the largest mass produced piston-engine aircraft and has the largest wingspan of any military aircraft. That’s saying a lot for a warbird built way back when.

Then, there’s its unconventional setup which includes a total of 10 engines. Six propellers in the pusher configuration and four jet engines which were added later let this behemoth of a bomber fly well over 40,000 feet and also had a combat radius of almost 4,000 miles. As planned, it could fly from central U.S. to Russia, drop bombs and return.

Due to their engine configurations, B-36 Peacemakers were nicknamed “six turning, four burning.”

Although a tremendous feat of engineering, B-36 Peacekeepers had a very short stint in the Air Force. From the time they were conceived, the jet age was already ramping up. By the time it was finished and in full swing production, plans for a jet powered nuclear strategic bomber were already being devised for future warfare (think B-52). Not only that, but the enemies at the time were also in the process of making jet powered interceptors like the MiG-15. Able to fly faster and higher, the B-36s would be sitting ducks up there.

All in all, these planes were bold and did what they were designed to do (aside from some initial engine fires.) Check out this video to see how awesome they sounded though. You won’t be disappointed.