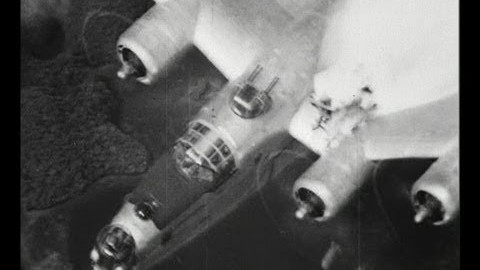 War Over The Pacific Wasn’t Cheap

This footage shot by Air Force cameras shows a B-24 Liberator, named Brief, being shot down on May 4th, 1945. On its way to a mission in Koror, Palau Islands to bomb anti-aircraft ground forces, Brief was shot down by one such installation. The anti-aircraft shell hit the left wing from the bottom breaking it off, sending the plane spinning toward the Pacific Ocean. 9 of the 10 in the crew died except for Lieutenant Kaufman, who survived the crash only to be captured and killed by the enemy.  Looking at this historical footage, one can see the everyday brutality these men had to witness and endure. Hats off to these brave fighters!

Several crew members aboard other B-24s witnessed the crash.

The B-54s were American heavy bombers capable of dropping over 15,000 lbs. of bombs in a single mission. Designed after the B-17 Flying Fortress, Boeing streamlined the new design and made it lighter, allowing the B-24s to fly faster, reaching up to 293 mph. Though crewmen preferred the B-17s due to their ruggedness, the Liberators were widely used in World War II and beyond, becoming the most widely produced heavy bomber in U.S. history.