Badass Pilot Takes The Phantom On Its Final Flight 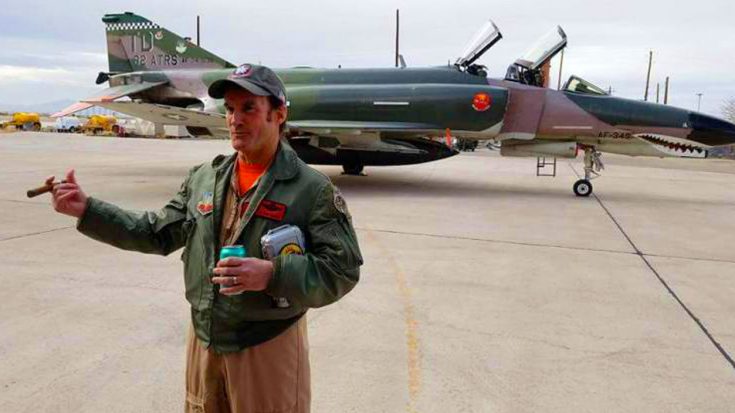 On December 21st, 2016 the F-4 Phantom held its final retirement ceremony at Holloman Air Force Base. After 53 years of service, this proud fighter was finally put to rest but not before Lieutenant Colonel Jim “Wam” Harkins could take it for one last spin.

Lieutenant Colonel Harkins spent 25 years as a fighter pilot for the US Air Force. In that time he spent his time flying A-10 Warthogs (1,500 hours) and F-16s (1,500 hours) before retiring. But that retirement didn’t last for very long, he just couldn’t stay away from the skies when the chance to fly an F-4 Phantom lured him back.

“One day in a bar on a Friday night there was some fat dude in the corner of the bar wearing a flight suit. And I wondered ‘Who the heck is that?’ And they were F-4 pilots, I didn’t even know we flew F-4s. So I went over there, talked to this guy and he basically looked at me and goes ‘Man, you’re not gonna get this job. We stay here until we drop dead.’ The openings were few and far between. So I go ‘Man, this guy is sorta rude.’ So I sorta forgot about it, but here I am five years later as one of those rude dudes.”

Harkins went on to fly for another nine years in the QF-4 Phantoms racking up 1,180 hours of flight time. During the last year of flying Phantoms, he was treated like a rock star, doing flybys on the farewell tour and meeting the fans.

“My last flight in the QF-4 was amazing. Quickest 45 minutes of my life, and my cheeks hurt from smiling so much. Plus I shared it with hundreds of my closest friends at Holloman AFB, NM and 1.5 million of my other “phriends” with the 4K 360 video camera that Airman Magazine put in my cockpit.”

Jim Harkins is one in a million and you can see just how thrilled he is to the last USAF pilot to fly the F-4 Phantom. Check out this awesome video just to see how much of a badass Jim Harkins is behind the wheel of an F-4.