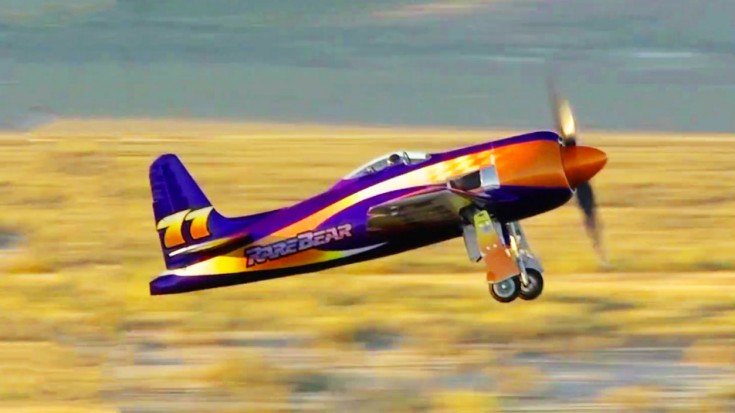 The Grumman F8F Bearcat was designed to be an American single-engined fighter that would be extremely fast in order to shoot down the Japanese Zeros. Unfortunately, development time was extended and the first Bearcats rolled out too late to see World War II combat. The F8Fs were then adopted by the U.S. Navy and the Marine Corps. As the fastest piston-engined aircraft in the world, stock Bearcats could reach up to 421 mph!

Often mentioned as one of the best-handling piston-engine fighters ever built, Bearcat’s performance was sufficient to outperform many earlier jets. Its capability for aerobatic performance is illustrated by its selection as the first demonstration aircraft for the navy’s elite Blue Angels…

The Bearcat you’ll be treated to in this video is one of a kind, hence the name ‘Rare Bear.’ Because of their great design, Bearcats were utilized in air races since the 1960s. This particular aircraft was tirelessly restored since 1969 by Lyle Shelton who took a crashed Bearcat piece by piece and made her, with much help, into the star she is today. Renovated and improved, the Rare Bear shattererd the world speed record for a prop plane topping out at 528.33 mph!