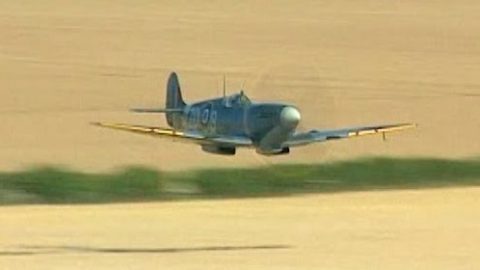 The late Ray Hanna can be seen flying an incredible Spitfire Mk IX MH434 in the fields behind Duxford on a video uploaded by WingsTV Channel. Taken from the documentary “A Spitfires Story,” Hanna shows off his flying skills and proves why he was a legendary pilot.

New-Zealand-born Raynham George Hanna emigrated to England to join the Royal Air Force. After qualifying as a flying instructor, Ray became a member of the Meteor aerobatics team at the College of Air Warfare. In 1965, he led the RAF’s Red Arrows formation display team to global fame.

Dubbed as the “The Reds,” Ray’s team developed a level of expertise and created signature styles in formation aerobatics. They established themselves as the world’s premier team and star attraction at airshows worldwide.

Ray’s appointment to the Overseas Ferry Squadron provided him with the opportunity to fly a wide variety of jet fighters. He ferried the early Hunters from Britain to India and the Far East which involved flying over Pakistan, where he was often taken by Pakistani fighters, letting him join in mock air combat when fuel reserves allowed.

Later in life, Ray founded the Old Flying Machine Company together with his son Mark. In 2005, the great Squadron Leader Ray Hanna has died peacefully aged 77.

Watch how Ray Hanna flies the Spitfire on the video below.