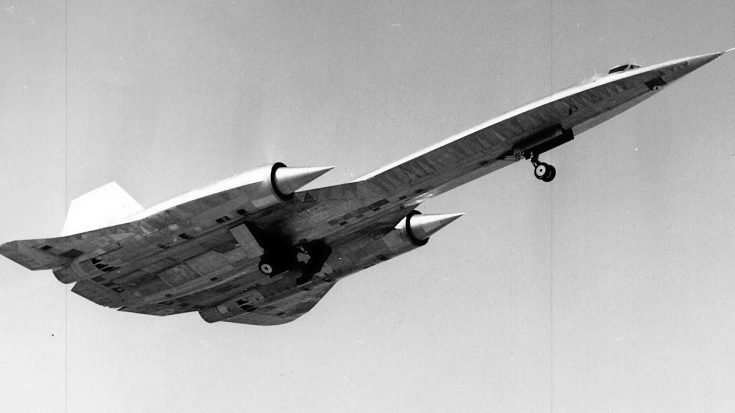 At first glance, it looks like the SR-71 Blackbird but if you look close enough you’ll see the differences. Based on designs by aviation Guru Clarence “Kelly” Johnson the Lockheed A-12 was built in 1962 and operated as a reconnaissance aircraft for the CIA. Able to reach speeds of Mach 3.2 and using early stealth technology, it was tested under extreme secrecy at Groom Lake Air Force Base, an area more commonly known as Area 51.

The testing at Area 51 included anti-radar studies, aerodynamic structural tests, and engineering designs. Six of the fifteen A-12 jets ended up having accidents, witnesses to these crashes were paid amounts around $25,000 each and threatened with “dire consequences” should they speak about the incident. This no doubt gave rise to the UFO conspiracy theories that surround Area 51 to this day.

Testing found that jets reaching Mach 3.2 were likely to melt at those high speeds. The only metal capable of enduring such heat was titanium which had to be purchased from the Soviet Union through fake companies in order to avoid suspicion.

“Our supplier, Titanium Metals Corporation, had only limited reserves of the precious alloy, so the CIA conducted a worldwide search and using third parties and dummy companies, managed to unobtrusively purchase the base metal from one of the world’s leading exporters – the Soviet Union. The Russians never had an inkling of how they were actually contributing to the creation of the airplane being rushed into construction to spy on their homeland.”

The A-12 was deployed for missions over Vietnam and North Korea but was retired after only a year of service. Many would argue that the A-12 was superior to its successors but sadly it didn’t have the time to prove itself. Test footage of the A-12 at Area 51 is hard to come by but a few of clips have surfaced and have compiled into a short video seen here.