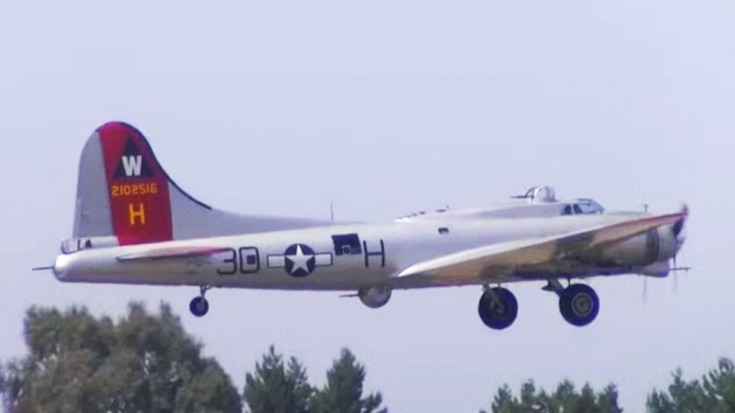 You are looking at 1 of 46 Boeing B-17s that are still intact today, 13 of which are airworthy. Boeing, winning over the United States Army Corps with their design, manufactured nearly 13,000 of these heavy bombers at a whopping cost of $239,000 in 1938 (about $4M today!). As the name suggests, this plane was a strategic weapon capable of traveling long distances, dropping literally tons of bombs, defending itself AND taking a brutal beating before returning back home. Although tough, the large size of the plane made it difficult to maneuver making it more vulnerable to attack. To remedy this, the latest defensive upgrade left the B-17 with 13X12.7mm machine guns in 8 positions:

With this armament, the Flying Fortress could do a better job of protecting itself when flying to its mission. As for bombs to get the job done, it could load about 8,000 lbs. on short missions and 4,500 lbs. on long missions. Overall, the B-17s dropped about 640,000 metric tons of bombs, which accounts for roughly 40% of all bombs dropped on Germany during World War II.