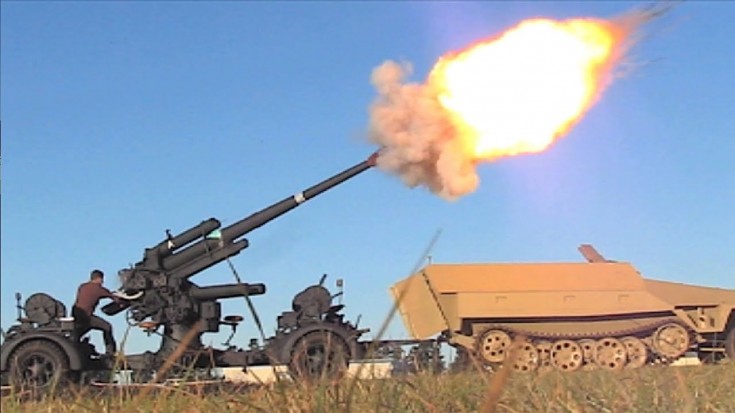 By The Grace Of God Do We Go!

Once Allied troops got on the offensive, extensive bombing raids began over Germany and their supply routes. To get the job done, countless bomber raids were organized under the name of Combined Bomber Offensive, or CBO. Starting in June 1943, round-the-clock bombing began with the British taking on night bombing missions and the U.S. heading daylight raids. Before escort fighters were assigned to protect the bomber squadrons however, they took on heavy losses due to intercepting fighter aircraft and 88mm flak infested skies they flew through.

Although used heavily to protect their airspace, Nazi Germany also used the 88mm Flak guns as anti-tank guns to support their troops on the ground.

The 88mm Flak went through four different changes over the course of its production and was designated 8.8 cm Flak 18/36/37 and 41. Over 20,000 of these guns were produced throughout the war and were used almost exclusively by the Nazi’s as home defense. Weighing over 16,000 lbs, the gun was designed to be extremely mobile and soldiers were trained to set them up in under three minutes from the time of arrival to operational state.