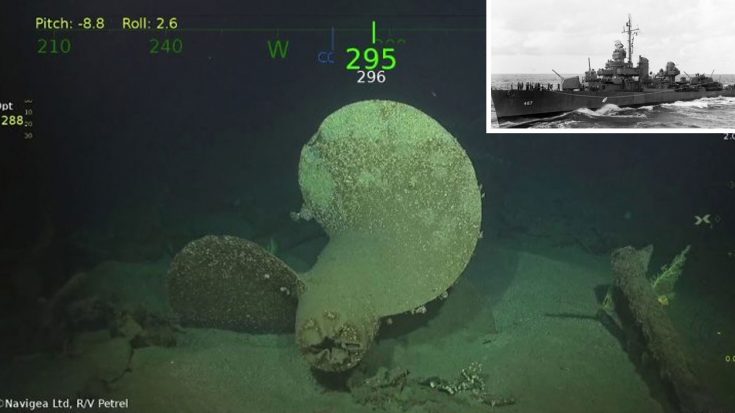 New underwater footage of the USS Strong. Sunk on the morning of July 5, 1943, by torpedoes from a group of destroyers led by the IJN Niizuki. It's said to be one of the longest torpedo shots of WWII (Possibly 14+ miles away). #RVPetrel pic.twitter.com/mdRzTuX8hn

The company just posted footage and pictures of the find, something we’ve placed for you below. Coming on the heels of the famed USS Hornet which was found days earlier, we can now get a look at another historical vessel that was lost in the depths of time.

USS Strong was a Fletcher-class destroyer built in 1941 and commissioned on August 7th, 1942. 367 ft long with a displacement of 2,050 tons, she had a crew of 287 sailors who eventually made their way to Guadalcanal in the South Pacific.

On the morning of July 5th, 1942, less than a year into her service, USS Strong was taking part in a shelling operation when she was struck in the port side by a Japanese submarine from 11 nautical miles away. 47 men perished that day while the remaining 241 were picked up by a nearby ship.

“While doing a test dive with the AUV in Kula Gulf, Solomon Islands we found a very distinctive debris field and deployed the ROV.” – R/V Petrel / Facebook

“Closing in on the debris field, this photo is from the ROV sonar. Unfortunately, our debris field was a lot of 55-gallon drums so we deployed the AUV on a full mission and found the Strong.” – R/V Petrel / Facebook

“This is the bow of the Strong. The anchor shank and some chain are visible.” – R/V Petrel / Facebook

“The bridge and base for the 5″ gun director/range finder is laying on its starboard side.” – R/V Petrel / Facebook

“The boiler of USS Strong.”

“The remains of one of the 21″ torpedo launchers. Strong had 2 launchers.” – R/V Petrel / Facebook

“The protective shield for one of the 21″ torpedo launchers.” – R/V Petrel / Facebook

The company also released the footage below of the first videos of USS Strong as their vessel approached. You can see it below.