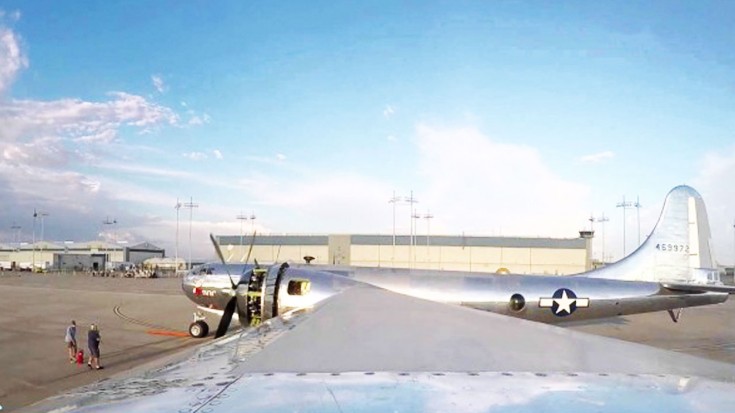 For the past few decades, FIFI was the only flying example of one of these magnificent Superfortresses. It is amazing that out of the 3,970 manufactured B-29s, the number dwindled down to just one being airworthy, but due to the hard work of hundreds of historic aviation lovers and volunteers, one more will be complete this year. As of today, September 28, 2015, shiny new Doc was wheeled out of her hangar and had her engines tested. It was a success to say the least.

Doc’s was restored by volunteers for the past 15 years, putting in more than 300,000 hours of heart and sweat.

This lucky B-29 was built in 1945 and was delivered to the USAAF shortly after. The name Doc derived from from the aircraft being part of a squadron that had Disney’s Snow White & the Seven Dwarfs nose theme. Dubbed Doc, she was then flown to China Lake, CA in 1956 to be used as a bombing target.Sadly, she remained in the desert forgotten for the next for 42 years where she withered away. She was then discovered in 1987 and 13 years later was picked up and driven to Witchita, Kansas, where her restoration began. This video is the fruits of that labor.