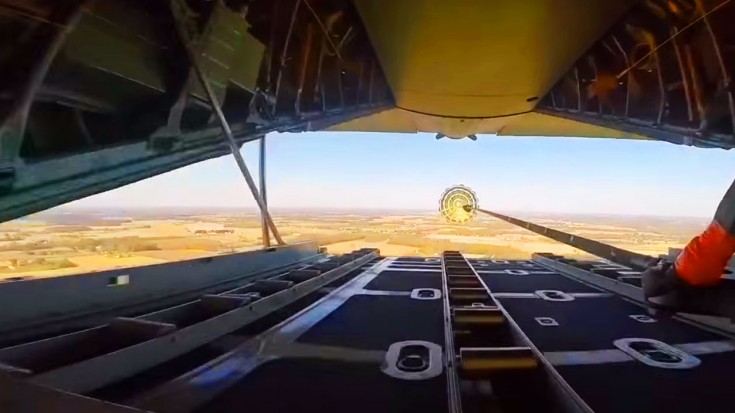 That Is Actually Super Cool!

A few days ago at the Mansfield Lahm Air National Guard Base in Ohio, the 164th Airlift Squadron performed a heavy load airdrop. It sounds like a pretty neat thing to see, however, they were also equipped with two GoPro cameras that will give you some unique perspectives.

The first one is attached to the front of the load. Once the back gate opens you can see the pull chute extend upon opening and then you’re in for a really fast ride out of the plane. It’s actually amazing how fast that load exits the back. After that, you’re in for a nice, mellow drop through the air until landing.

Its hard to believe that such a versatile plane like the Hercules first took flight just 9 short years after the end of World War II.

The second camera is attached to the back. You see one of the airmen standing there doing his thing and “zip,” he’s gone. Again, the speed at which that little chute can pull such a heavy load is incredible.

There are also some great cockpit shots of the take off as well that make you reassess why you didn’t become a pilot. As for the plane, it’s of course the mighty C-130 which is often called the “Jack of all trades.” Love that warbird!