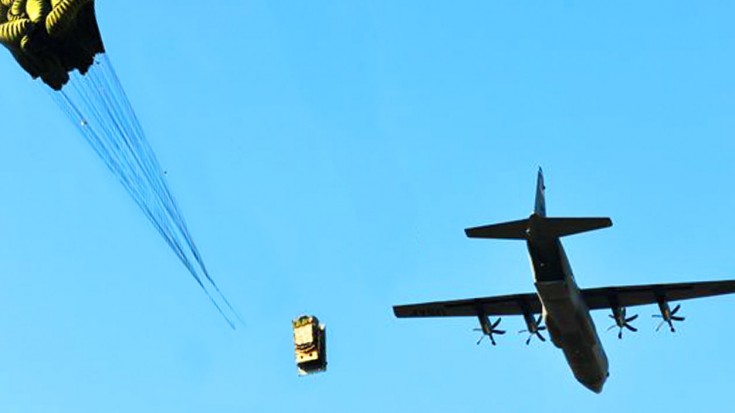 A few months ago the US Army’s 173rd Airborne Brigade was performing routine exercises in Germany. As part of the Joint Readiness initiative, a Humvee drop was the task at hand.

Typically how that works is the equipment (in this case Humvees) are securely loaded onto C-130 or other transport aircraft. Once airborne, the soldiers practice airdropping them into designated areas on big pallets equipped with parachutes. When all goes as planned, they land on the ground on nice cushy pads and the soldiers pick them up and get ready to do what they do best. In this instance, its was not the case.

Although the case is still under investigation, two things might have been the cause of this mishap. One is high winds and the other bad rigging. As all the other drops went as planned, we’re thinking rigging was definitely the problem here.

We’re trying not to judge here, but at about $220,000 a Humvee, it seems like over a half a million dollars went up in smoke with some laughter in the background. We’re sure someone is going to get the… chewing of their life, but as a taxpayer, that hurts a bit too.

Just so you know, the first one drops 24 seconds into the video. The rest will follow.