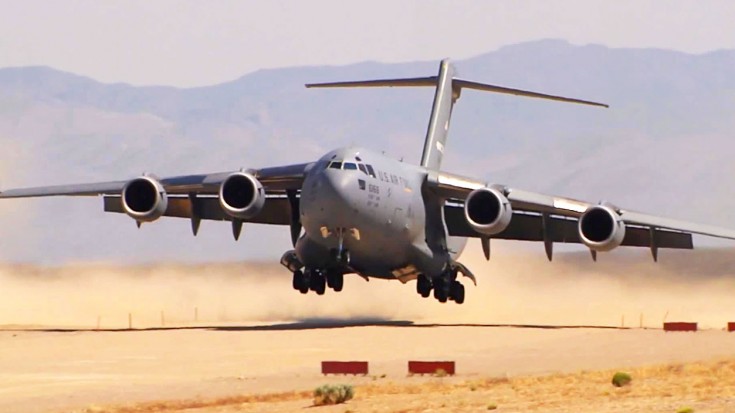 Don’t Know Why, But This Is Really Cool.

Takeoffs and landings are impressive no matter what. Be they World War II, Cold War or modern day planes, something about a multi-ton aircraft setting down or gaining speed to fly is amazing. Nowadays, these things can even land where ever they want, within reason of course.

Afghanistan doesn’t really sport lots of perfectly paved airstrips, so temporary ones are made to establish air bases. In this video, a C-17 transporting supplies for U.S. troops lands on one such makeshift runway.

C-17 Globemaster IIIs are a military transport aircraft built by Boeing in the early 90s.

The cloud of dust that it kicks up though is awesome. About 20 feet of the ground, the jet stream already starts kicking up some sand. When it sets down though, these billowing clouds emerge that are so thick you literally can’t see through them.

The landing as you’ll notice is also relatively smooth considering where it’s landing. The troops of course groom the makeshift airstrip as you can image, getting rid of any major debris like big rocks and clumps of vegetation. This ensures that landings go as smooth as possible.