C-17 Lands On Dirt So Smoothly The Wings Barely Moved 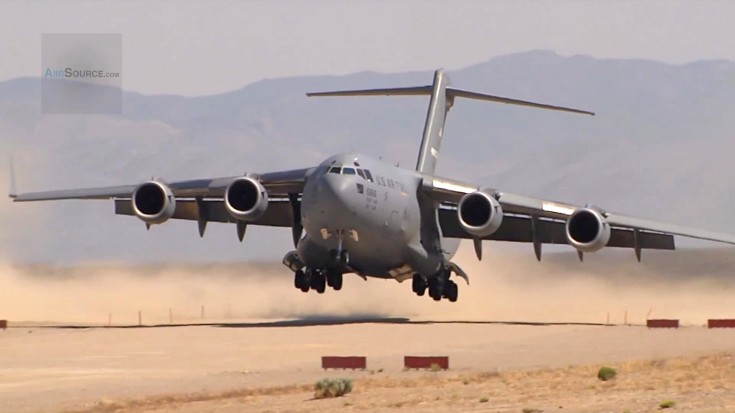 Seriously, Touched Down On Dirt Like It Was Nothing.

C-17 Globemaster IIIs are truly powerful beasts. With the ability to hold 134 troops or an M1 Tank as well as a variety of other combinations of personnel and/or equipment, they are true workhorses when something big and important needs to be transported.

Powered by 4 Pratt & Whitney F117-PW-100 turbofans, they can lift off with a max weight of a whopping 585,000 lbs. That’s a lot of cargo! Once loaded though, these puppies can also haul their cargo to a max distance of 6,456 mi depending on the load.

In this video, a Globemaster III also shows another great characteristic which it possesses. C-17s have landing gear that is tough enough to absorb impact of unconventional runways, such as this dirt, rough landing strip. Kicking up massive amounts of dirt and debris, the plane showed no signs of trouble.

This of course was not only due the plane, but also a skilled pilot who set her down. As you watch the video, notice the asymmetrical angle of approach (probably to compensate for crosswinds) and then the final correction right before touch down. Hitting at the same time, the wheels just glided onto the runway, barely making any impact. Perfect!