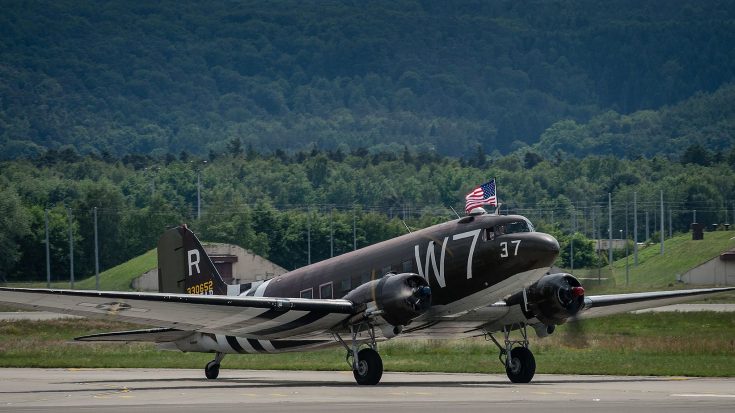 The airworthy C-47 Skytrain “Whiskey 7” lives in Geneseo, New York at the National Warplane Museum. The rare D-Day survivor is the museum’s pride and joy, a precious reminder of the hard-earned victory on June 6, 1944.

On that day, she transported paratroopers from 3rd Battallion, 505th Parachute Infantry Regiment, 82nd Airborne Division. Out of more that 800 C-47s, Whiskey 7 was just one of a few to make it the assigned drop zone over the town of Sainte-Mere-Eglise.

A paratrooper named Les Cruise jumped from her belly that day. 92 years old now, the veteran joined the military at just 18. He carved a beautiful life for himself even as he lost friends in battle and sustained an injury in his wrist, earning him a Purple Heart.

“An American citizen should be basically a responsible person –  to his family first, to his community, and to his country” – Les Cruise

Les grew up as an orphan. Now, family is what is most important to him. When he returned from WWII,  he secured an architect job and started a family. With pride for his family which now includes 13 grandchildren, he says, “This is what we’re supposed to have.  How can you be 92 and not blessed.”

But Less’ story doesn’t end there. Filmmaker Michael Ayjian of 7 Wonders Cinema met him nearly a decade earlier and fell in love with his story, so much so that after making a documentary on the paratrooper in middle school, he revisited the project.

It was after the first interview for “All American” that the two discovered that Les’sD-Day ride, “Whiskey 7”, wasn’t out of reach. With some help from the museum, they got Les a reunion with the grand ol’ C-47 and even took his entire family along. They also had a recreational team that portrays the 82nd Airborne reenact Les’s experience.

The result is both visually stunning and emotional. Les has all the wisdom of his 92 years, but his mind is sharp and his heart is young.

See the gorgeous video below.