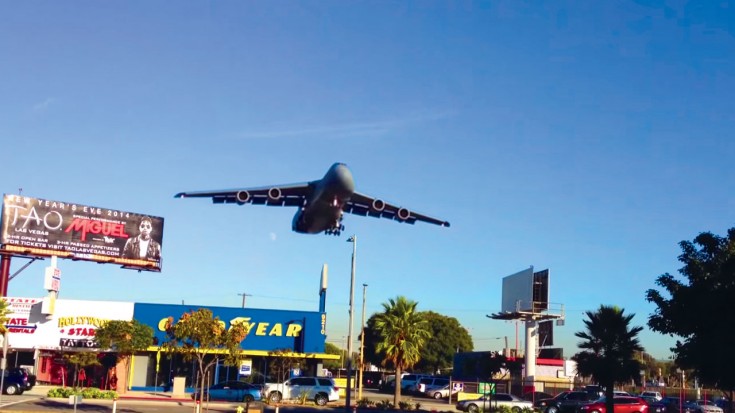 It’s a rare treat to capture one of the world’s largest military transport planes on camera, let alone flying into LAX. This is exactly what happened here and whoever got this on camera should be congratulated ten fold.

First of all, it’s not a typical approach video as the guy’s vantage point is awesome. He captured this behemoth coming in over the road and some convenience stores, which is a pretty rare occurrence. It’s actually kind of crazy to see this thing flying over a regular neighborhood and we’re sure a few people didn’t know what was happening for a second there.

Secondly, and this one’s important, the filming hero here got many things right that others typically ruin a video with. For one he used a high definition camera AND uploaded it properly. So, we can now look at a nice and crisp video and not a couple of squares that resemble a plane. Also, his panning was pretty solid too. He kept the camera nice and steady on approach, and panned it just right on the overpass. No shakiness and most importantly, he didn’t lose the plane from the shot. How many of those videos have you seen?

Anyway, enough about the cameraman. Enjoy this screaming beauty by watching this video.