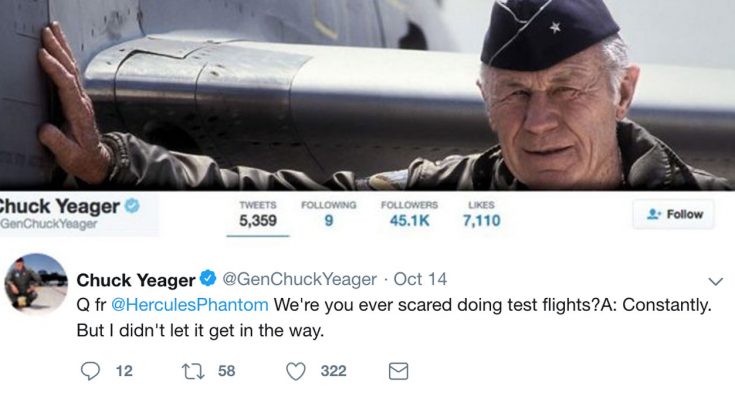 Charles Elwood Yeager, who often goes simply by Chuck, is one of the greatest aviators produced by the United States. A flying ace during World War II and also flying during the Korean War, Chuck Yeager dedicated his life to flying which included being a test pilot for a number of historic flights.

95 years old as of this writing, Chuck is still active in the aviation community and even on Twitter, something one could not conceive of 70 years ago when he first started flying.

Not only that, he answers many of his fans’ questions and oftentimes they’re extremely entertaining. Here are some of our favorite ones from the past two months that will give you a peek behind the scenes of what you might have heard or read about him:

On His Broken Rib During His Infamous Bell X-1 Flight

Q fr @lephotosbytony I was wondering, when you landed: was it difficult getting out of the cockpit with that broken rib? Did the base doctors eventually find out about your condition? A: Don't remember having trouble. Yes. #BellX1 #SoundBarrier #MACH1 #THERIGHTSTUFF @TIME

Revealing How He Felt Before Each Of His Test Flights

Q fr @HerculesPhantom We're you ever scared doing test flights?A: Constantly. But I didn't let it get in the way.

Met my second cousin Claude today & his daughter at @YeagerAirport Air show. Last time we met may have been 78 years ago. Who else can say that it's been 78 yrs since they saw a relative. He came to the air show at Yeager Airport. #family @usairforce @wvgazettemail

Q fr @ShorealoneFilms What was for dinner when you got home that day (after breaking sound barrier)? A: Pancho made good on her promise -Glennis & I had steaks at #Pancho's & a lot to drink. We couldn't tell anyone why, tho' for 6 mos. @TIME @CNN @seanhannity @MSNBC @JudgeJeanine

And As You’ll See, He Even Tweets During Games Like Most Of Us Do

Chuck Yeager, the man, the legend, never ceases to amaze us. He’s probably the only man nearing a century years old who tweets on a daily basis.

Good for you, Chuck!

We’ve also included a short clip from the movie The Right Stuff depicting the moment Chuck broke the speed barrier.